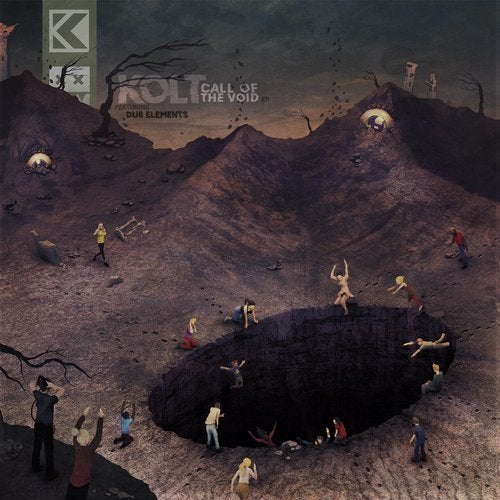 The anomaly seemed at first innocuous enough. Following the first reporting of its existence, a team of scientists had been dispatched for its study. With their instruments they recorded a great deal of data, recovering soil samples, barometric readings, & even attempting to peer into its murky depths. The official report labeled it a sinkhole like any other, and the team departed without so much as a second thought. The area was cordoned off and signs were placed warning of the sinkhole, but no more was done to ward those nearby from it. Naturally with time, rumor spread and the curiosity of the citizenry was piqued as a few private citizens snuck past the barricades to inspect the sinkhole for themselves. Upon their arrival, their eyes met with a sight far different from what the official report had read. A blackened corruption spread from the sinkhole, its inky tint smothering the verdant field that had lain in its place. Not a single plant grew, and the few trees had been twisted into forms which seemed to mock life itself. Within the minds of those present, a eerie sound reached out. Its beauty captivated them, the beguiling melody transforming the wasted landscape into an eden before their very eyes. Its verdant nature returned, blossoming before them and casting its petals upon zephyrs that brushed the skin of those watching with their warm embrace. At the center of this lush landscape lay a crystal pool, clear as glass and sky blue. Those watching fell to their knees, awestruck by the beauty of what lay before them. They found themselves wrapt in dance, spiraling throughout the meadow and circling towards the pool at its center. They spun faster and faster, orbiting closer to the pool with each moment, its cool waters calling to them. Crying out with pleasure, one closest leapt into the pool, soaring momentarily above its surface before breaking through. The illusion faded around him, the blackened wasteland searing back into his eyes. His cry turned to fear as he realized he was still falling, deep within the sinkhole in the wasteland's center. As it echoed around the depths in which he fell, while the others above continued their dance obliviously, as they followed in his footsteps, moving ever closer to the pool as they danced to the CALL OF THE VOID. KOLT returns to EATBRAIN following his 2018 release of the OCTOPUS EP on the label with his latest four track EP entitled CALL OF THE VOID. INTO THE VOID opens the EP with its sharp edged synths, which slice their way to the fore following their introduction by ascendant arpeggios. PATCHWORK's similar arpeggio's take on a more ominous tone, providing a cinematic atmosphere soon overtaken by the rapid oscillations of a mobile metallic bassline. SPACE GHETTO is narrated by a conspiratorial vocal sample that lends a sinister atmosphere to its stomping halftime rhythm. TIMELESS features the addition of the textures of DUB ELEMENTS alongside KOLT, resulting in a furious sonic assault driven by frantic high pitched stabs and a roaring bassline. With CALL OF THE VOID, KOLT once more calls out to all who hear his music with his irresistible sound.

Call of The Void