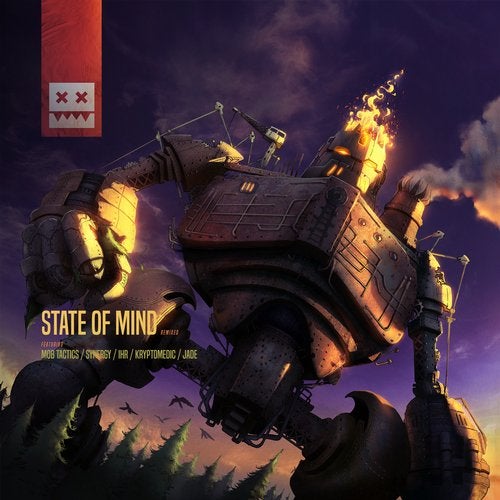 STATE OF MIND returns to EATBRAIN with four reimaginings of their past tracks by themselves and others within the harder side of Drum & Bass. Receiving a flip by Italian neurofunk trio IHR is the notorious collab with label bass Jade 'HIGHLANDER', which features the addition of a motive & fluid reece bassline atop the track's already driving drumbeat for a dancefloor devastating sonic combination. STATE OF MIND themselves present a VIP of GIANT, which smashes forth on massive drums accentuated by simultaneous bass stabs in a titanic sprint beneath detuned tonal sprites. BYPASS is remixed by MOB TACTICS, whom bypass nothing as they push the track into overdrive in a flurry of furious basses, frenetic arpeggios and brief moments of levity provided by snippets of vocals. Closing the EP is the SYNERGY remix of TIME SLIP FT. KRYPTOMEDIC, which rides the MC's narration upwards in an ever intensifying crescendo towards a distorted realm of metallic basses that rocket out above their electrified companions and an unstoppable drumbeat. In all, the STATE OF MIND REMIXES morph some of the prolific duo's most powerful track on EATBRAIN into monstrous new forms, setting them up for further dominance on future dancefloors.