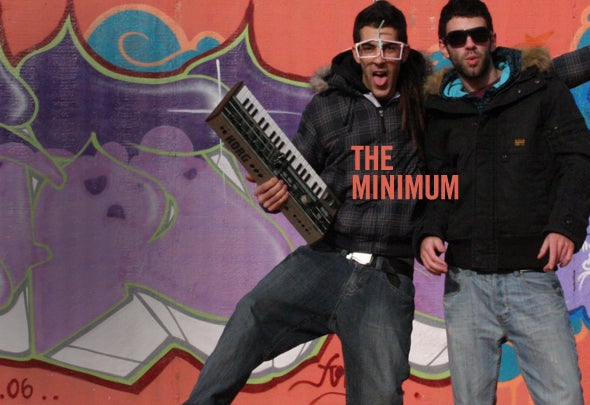 The MiniMuM is a project formed in 2006 by Luis Lugilde and Miguel Moraleda, 2 Djs and producers born in Barcelona in 1987. These two young producers are exploring electronic sound dance, fusing techno, minimal and electro.These producers and sound technicians specializing in electronic music began his career in separate 2003, and in 2006 after making some productions arised the idea of creating a different sound, in steady progression and aimed to the dance floor without losing the minimalist and underground nuances that characterize their productions.\par In 2008 they sign their first contracts with Attary, Trebol and Upbeat Rec, releasing many Eps like The first Sign, which includes Lost Highway, a track charted and played by artist like Mark Broom, or Horny Robots which appeared in Beatport TechHouse Top 100 and played and supported by many djs like Flutuance,Minibus or Miles Dyson,this track was reedited by Plasmapool Rec. on 12' format vinyl.They have released music too for labels like Kitsam Rec (Mastiksoul) and Durty Rec (Donald Glaude, Pig & Dan),in this case, their release 'Alinoman Ep' included Alex Young Remix, reaching the #11 on Beatport Minimal top 100. Also their productions and remixes have been supported by M.N.L, Angel Alanis, Boris Brejcha, MidMind, Mark Knight,Cristian Varela, Tristan Ingram, and many others. Now a days they have become Co-Managers of brand new electronic label Podenco Recordings and they're working in new techno-minimal productions for 2009. In their sets, they mix minimal, techno and hard tech styles..with progressive and electro nuances, adapting to the people and offering forceful and groovy music with floating moments. Also they include phisical synths and samplers in their shows, making different every track they play and getting more emotional feeling adding melodies or effects.They've played with artists like Nuria Ghia, Nano Vergel (nominated to DjMags for best dj in ibiza in 2009),Prymate (Extrema Partys Ibiza) and some popular djs in Spain