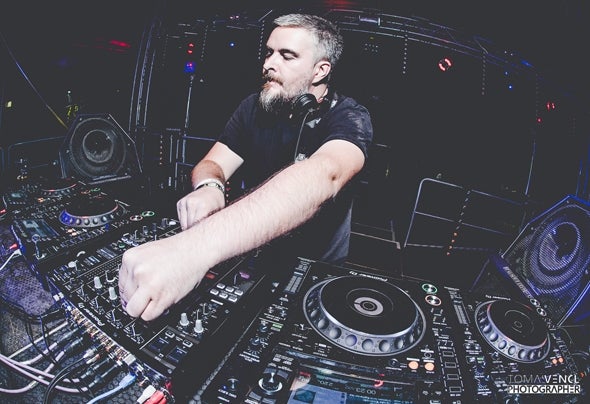 FREQAX is the indelible moniker that houses the searing frequencies of Romanian producer Adrian Andrei, a sonic creator enriched with a wide array of inspirations that have emerged in transcendently heavy forms through his many productions. The Freqax entity emerged through its first label platform in 2009, with the release of ‘The Man with no Faith’ on Sinuous Recordings, during the first phase of the project, during which Freqax consisted of 2 members (the 2nd member – Adrenalina – left the project in 2012). Since that first release, the frequency and quality of the project’s output has evolvedmercilessly, with singles and EPs on some of the decade’s most revered and hard-hitting drum & bass labels including PRSPCT, OTHERCIDE, ALGORYTHM, YELLOW STRIPE and FORBIDDEN SOCIETY RECORDINGS, as well as numerous consistent and rising imprints.Within the last 12 months alone, Freqax has released more than 33 tracks, with collaborations from fellow leading producers in drum & bass, including Counterstrike, Katharsys and Sinister Sounds, as well as remixing Agressor Bunx, Anatomix and Brainpan. The ‘Meant to Believe’ LP saw support on Noisia radio, and club play from a staller array or artists including The Upbeats, Dieselboy, Misanthrop, Evol Intent, Jade and Mind Vortex. His commitment to building sonically superior audio with a direct focus on evolving musical ideas riveted by brutal percussive spines consistently shinesthrough. With a fresh LP in the works, and consistency in his flow of deafeningly immaculate ideas – Freqax is set to continue his devastation of the scene.