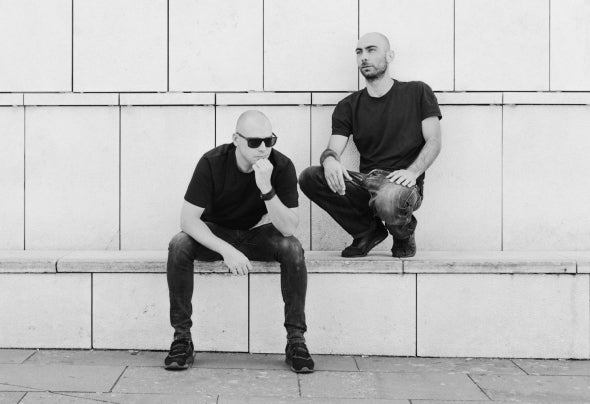 Exilles is a project born from the alchemy of two minds, united by a common desire to undermine, compose and recompose deep techno sounds with a mystical and enigmatic imagery. They strictly perform live, orchestrating ancestral ceremonies with analog machines and modular synthesizers, whose dark and hypnotic sounds chase the persistent in a synesthetic atmosphere. A millennial stronghold, where space and time seem to crystallize. Exilles invites you to enter the wide entrance, built with thunderous, corrosive kick and neurotic sounds. Proceed to enter a maze of tunnels, stairs, niches that emerge from the hypnotic sounds from the oor and clinging on to it, little by little, airy and seductive melodies, inviting you to go even deeper. And then that telluric rhythms became more tight and you nd yourself trapped, breathless, paralyzed: a crypt, a man. The face covered with a mask. The sound waves become ink and pervade the body, helpless, wrapped in a dream synth tangle. The assertive kick back lashing his shots, with the ritual ending. The crossing to escape has finally opened.This is the imagination of Exilles, which with its techno built around the polarity of light and darkness, black and white, continuously keeps us poised between opposites, between consciousness and raving.