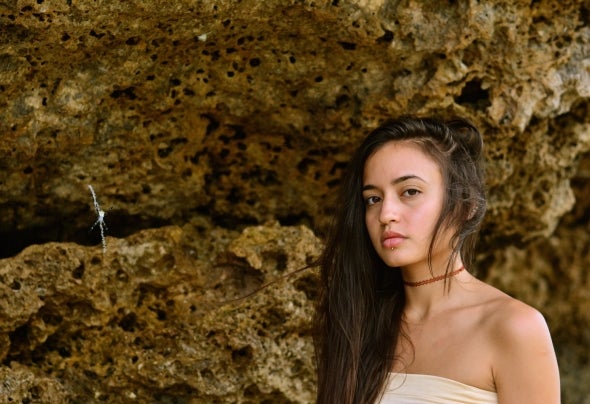 If Philip Glass had not composed the soundtrack of the film Koyaanisqatsi (Godfrey Reggio, 1983), Dugong would be the only one able to replace him, as her music stands out as the missing link between the complex textures of Glass’s opera and the mystico-geographic trip of Reggio’s images. Sophia was born in the Philippines a little over twenty years ago, from a Filipino mother and a Swiss German father, before flying to Bahrain where she melted with the various communities of this small island in the Persian Gulf and discovered Indian food in the Indian gardener's shed. Finally settled in Montreal, she created Dugong, a musical avatar to realize her credo: "translate my vision into the universal language of emotions."As her many journeys, affiliations, ethnic experiences and the many dimensions that drive it, the music of Dugong is difficult to classify. From the various landscapes she admired or imagined, Sophia invents genres that exist only for herself, where she put her tracks: Philippine volcanoes ("earthquake music") to industrial factories ("Stampede music"), through the songs of the aboriginal tribes ("talking trees"). A sensory catalogue like the world: calm, chaotic, sometimes ugly, often beautiful, always intriguing. From the wonderful feeling of being connected to the things we love to her deep sadness in front of the destruction of the natural world (the dugong is a marine mammal from the Pacific, heavy and majestic, threatened by tourism and hunting), emotions are the primary sacrament of her creation. For her, Dugong is the ideal way of telling stories and building a world of joyous, multicultural coexistence between humans, plants and animals, and to "build a protest anthem army." Sophia likes to think her music as "an orchestra of natural disasters." The complex and unpredictable sound of the clash between Earth, nature and civilizations.