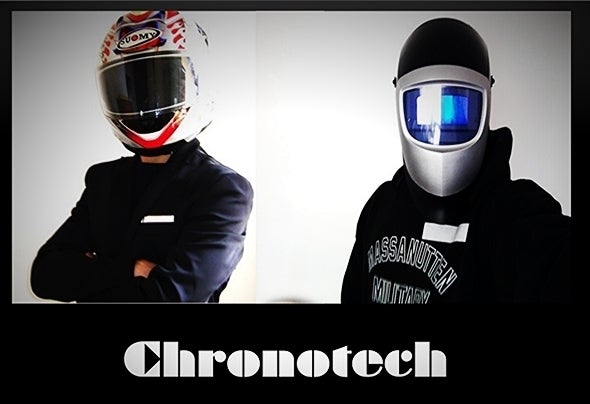 We are from the year 2256, from the colony of Saturn."Chronotech" are an italian duo composed by : Cristian Paolo Agrillo (Cristian) and François Milicia (Frunsoo).They are native from the U.S.E. (united state of europe).After they being transferred to saturn in 2250, they took the citizenship on saturn and began playng music in the city of Vitruvia, and later around the galaxy on different planets; while travelling the planet navigation, Carl the cyborg, their interplanetary taxi driver, as well as their bodyguard, for a problem due to the mechanics of the spaceship, is forced to take a nearest wormhole, unfortunately an illegal one, to ensure their safety.so, coming into this wormhole, forbidden acces to the population, they are accidentally transported into the past, in the year 2011. now they produce music on this planet trying to redo what they did before in the future.