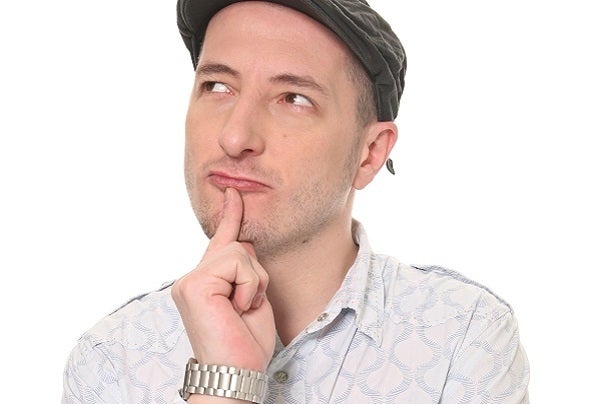 Chris was born and raised in Nottingham, England and was first introduced to dance music through regular trips to Cream, Club U.K., and Atomic Jam. It wasn't long before he bought a pair of cheap decks and a mixer and spent his time when he wasn't out clubbing, holed up in his bedroom honing his DJing.Chris chalked up some valueable experience playing occasional house parties in bars and clubs in Wolverhampton and Liverpool in the early 1990s whilst studying a Biomedicine degree before moving to Prague in 1996 in search of the Bohemian lifestyle and further DJing experience.After spending his first few months in the city giving out demo tapes and playing all-night sets in dingy bars for the the price of a taxi home his talent was noticed by promoters Lighthouse who booked him to play some of the largest and highest profile events in the country at the time alongside such names as Dave Clarke, Darren Emerson, Paul Oakenfold or Josh Wink.At the beginning of 1997, Chris teamed up with the promoter of Klub X - Nigel Demon - and started playing at and co- promoting a weekly Saturday night session at the club. The night was a surprise success from the outset and he played there weekly until developers closed the club in 1998.It wasn’t long before Chris‘ reputation spread outside of Prague with booking requests arriving from throughout the country. To date Chris has travelled hundreds of thousands of kilometres criss-crossing the Czech Republic to present his sound to eager clubbers. Not content with merely DJing Chris headed the Prague branch of British legend Eddie Richards’ dy-na-mix DJ booking agency and threw a number of sell-out one-offs for which he brought the talents of Kenny Hawkes, Ian Pooley and Pete Heller to Prague.This experience was to prepare Chris well for Climax – Chris’ monthly residency at top Prague club Roxy which he started in November 1998. He still resides over Climax to this day to what is often a capacity crowd. T he night that British Mixmag magazine described as “the epicentre of a healthy funky house scene” in the Czech Republic celebrated its 15th anniversary in 2103, making it the country’s longest running club night. Chris has invited to guest with him at Climax a great many big name artists such as Antoine Clamaran, Olav Basoski, Prok & Fitch, Crazibiza, Hoxton Whores, Hatiras, Abel Ramos, Justin Roberston, Ashley Beedle and many more.In 1999 he made his first forays into music production and the following year saw the release of "2 Fukt 2 Funk" on Beeswax Records, which, similarly to his official mix CD on Next Era, went on to sell out every last copy. Inevitably, this wasn't to be Chris' last time in the studio and he has continued to release and licence a steady stream of tracks and remixes for numerous labels throughout the world. Along the way his tracks have picked up support from artists such as Erick Morillo, Sebastian Ingrosso, Olav Basoski, My Digital Enemy and the Flash Brothers as well as radio stations globally. Supplying music to Czech state television, being commissioned for remixes for everything from heavy metal and pop bands to solo singers and techno artists as well as producing radio ads and jingles have all helped Chris’ development as a producer.Chris is no stranger to the media having given countless interviews for TV, radio, magazines, newspapers and websites worldwide. Previously Chris has co-hosted shows on Czech radio stations Fajn, Radio 1, Vox, Kiss and Fun One but for since 2010 has his own regular Sunday night show on Dance Radio fm, again under the Climax name. Over the years he has consolidated his position as an indispensable part of the dance scene headlining events up and down the Czech Republic and as far afield as Japan, UK, Croatia, France, Ukraine, Germany, Poland, Austria and Slovakia.At home in the Czech Republic he is undoubtedly regarded as one of the top house DJs in the country. With over 100 bookings each year and plenty of experience of playing for crowds of over 10,000 people there’s few clubbers in the country that haven’t danced to a Chris Sadler DJ set at some point over the years and to many he has become a taste-maker and an icon. His personal highlights includes playing in a Tokyo skyscraper, inside the spectacular Prague national monument, packed gigs at Mayday and repeatedly at Creamfields or playing alongside such legends as Carl Cox, Chemical Brothers, Danny Rampling, Derrick May, Sasha, Kraftwerk, Basement Jaxx or Deep Dish.Having established a faithful following, Chris' uplifting, funky and powerful house sound is now more in demand than ever before.