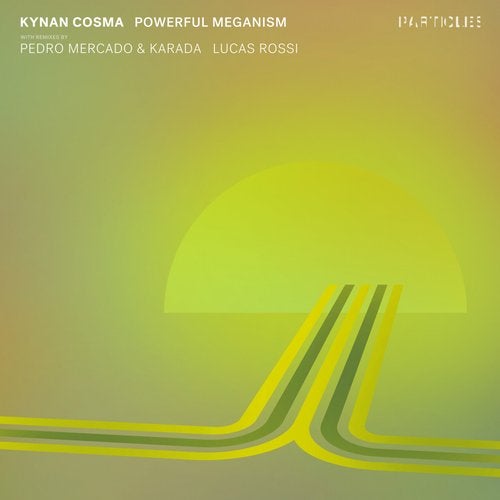 An artist with a rapidly growing reputation within the underground dance fraternity, Kynan Cosma returns to Particles following a remix of Dio S in June 2018. Now making his full debut, "Powerful Meganism" is partnered with remixes from Argentina and Belgium.

Developing the passion that flows through the veins of Kynan Cosma, the Belgian artist believes that "every sound has its own soul". Using a Juno 106 to help create a 'musical playground', Cosma's production career began with the twin-track "The Void" for Deep Therapy Records in March 2016. Moreover, Cosma also found a home on Moodmusic, Deep House Belgium and the best-selling Visceral compilation. "Powerful Meganism" is driving, techno fuelled offering that revels in dominant kick and strong percussive cadence. Pausing at the second movement with gravitas, a bruising bass groove forces its way to the fore while claps and shakers fly across the left-right spectrum. A loquacious vocal sample brings to mind Orbital's intelligent use of such sounds while a rapid-fire arpeggio hits its stride in the third movement to impressive effect.

From the Argentine city of Cordoba, Lucas Rossi cites Sasha, Digweed and Cattaneo as icons who have helped shape his sound. Performing to audiences at clubs and events that include, Bahrain, Boiler Woods and "Music in the Desert", Rossi's production work has seen him feature on a host of impressive imprints that include Balkan Connection, Stripped Recordings and Lowbit. A single remix of Lanvary for Particles in October 2017 is now followed by a second as the Lucas Rossi remix of "Powerful Meganism" retains the strong rhythmic dynamism of the original while making intelligent use of the arpeggio that acts as a vehicle for a raft of additional production work to flow. Building effortlessly to a rousing dénouement of pads, white-noise and counterpoint melody, the vocal sample provides the perfect transition for the track to move into a dance-floor friendly third movement with genuine skill and technique.

Belgian duo, Pedro Mercado and Karada, have been regular performers across the clubs of their homeland as well as, Sonar Off Barcelona and Amsterdam Dance Event. Remixed by a host of stars that include Rodriguez Jr. and Jimmy Van M, their work for Natura Viva, Parquet and MNL, has seen support from Einmusik, Da Funk and Hernan Cattaneo. Remixing Forniva and Desaturate for Particles in March 2018, Pedro Mercado and Karada now return with a wonderful interpretation of "Powerful Meganism". A rhythmic framework of strong kick and percussive groove provide the perfect vehicle for the arpeggio and vocal sample so central to the original, to make their presence felt, while a new chord progression creates a clever new variation on the melodic foundations of Kynan Cosma's original. Building into the third movement in rousing fashion with combination of rhythmic flair and new melodic components, Mercado and Karada have created a unique interpretation.

As Kynan Cosma's "Powerful Meganism" roars into life, Lucas Rossi and Pedro Mercado and Karada are important cogs in the machine.