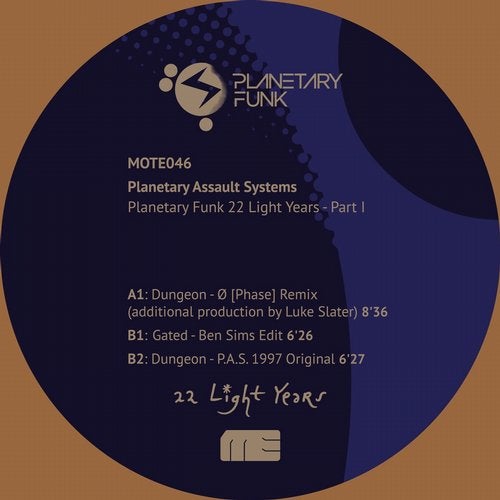 It's almost hard to believe that the original series of "Planetary Funk" 12"s by Planetary Assault Systems dates back to the early 1990s, given the continued relevance of this hard-edged suite of tracks, and their ease of integration into present-day techno sets. Characterized by their unflagging momentum and by almost militaristic deployment of techno's atomic particles - submachine-gun handclaps, acid-soaked bass patterns, the icy chatter of ride and hi-hat cymbals - the spirit of these tracks has never really vacated the club scene. The 21st century re-activation of the Planetary Funk moniker isn't a nostalgic look backwards so much as an expansion of its original mission.

Leading off the proceedings on this first volume is "Dungeon," a 1997 original from P.A.S. which already shows this unit transitioning from the fierce, frantic atmosphere of the earlier Planetary Funk EPs into something more akin to the project's present-day approach: not more "laid back" by a long shot, but more mesmerizing and loaded with anticipation. The repeated slow fade-in and detuned drop-out of a wasp-like hum is just one fascinating feature of this eerie track, which also includes other ephemeral activities occurring on the perimeter and a glassy rhythmic figure which snares your concentration and refuses to let go.

The ? [Phase] remix of "Dungeon" also takes the listener to a dark place of uncertainty and possible hidden dangers, but with more vigor and percussive intensity added to the mix: with an extra (over)dose of vibrato added to the signature hum from the original, with more force added to the kick drums, and more variety in the dialogue between other percussive strikes, listening to this paint-peeling, stomping creation is an exhilarating man-machine experience like snaking a motorbike at high speed through gridlocked traffic.

Not to be outdone, Ben Sims appears on the scene as well with a re-envisioning of "Gated," from the first Planetary Funk A-side. Retaining all the controlled chaos which made this track a classic, Sims adds more of his own fuel to the fire by downtuning the bass, re-adjusting the tempo and adding extra distortion on the slamming kicks. Utilizing a full complement of additional tension-building techniques, Sims doesn't try to upstage the original but does try to show a definite evolutionary process at work. In fact, the whole record is a celebration of this evolution, showing how Planetary Funk has naturally adapted to strange new times, but has kept its soul and character intact.