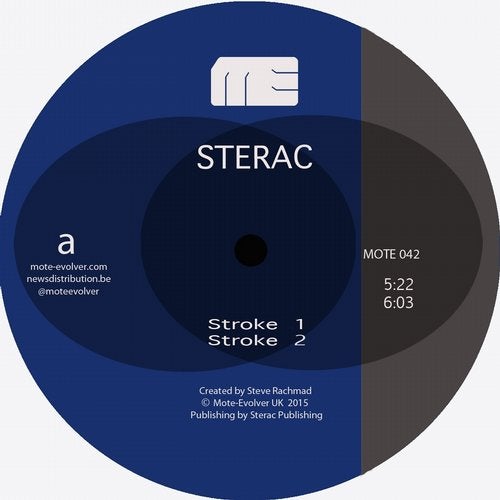 Having both been on the scene for over twenty years, Mote Evolver's founder Luke Slater and Dutch producer Steve Rachmad are considered veterans of the techno scene - both outlasting the genre's various dips and flourishes in popularity. This considered, Rachmad's debut on Mote Evolver seems all the more highly anticipated. Operating under his Sterac guise, Rachmad's inaugural contribution to the label comes in the form of four hypnotic, rolling drum-machine experiments. Rachmad's formula across the EP is a spartan, uncluttered one. Even the track titles (Stroke 1 - 4) suggest he has taken some pains not to complicate proceedings unnecessarily, instead letting the music stand for itself. In the wrong hands the use of Roland 808's can feel like a tired cliche when it comes to techno, yet Rachmad's manipulation of the tool is nothing short of masterful. There is a buoyancy to his thudding rhythms, filtered hats shuffling effortlessly above raw 4/4 pulses. This trait is defined right from the offset - 'Stroke 1' marching forward steady and resolute. As with the rest of the release, the track has an abstract quality to it - the elements are processed heavily; filters and stereo-delays a common feature. Across 'Stroke 2' even the synths used feel hazy and out of focus, jutting forward between Rachmad's stuttered rhythms. This and 'Stroke 3' both have a celestial space-age feel, like a satellite being gracefully travelling across the orbit. The EPs closer on the other hand, 'Stroke 4', is incontestably rooted to the dancefloor. Devoid of melody, the track is a frantic percussive workout, jagged claps and ticks jutting out between Rachmad's booming low-end. As a whole, the EP maintains a perfect balance between holding a consistent theme, whilst still offering plenty of twists and turns along the trip. It is perhaps little wonder Rachmad's Sterac project has been garnering much acclaim in recent years - this EP in particular revealing a focus and clarity that only comes with years of experience.