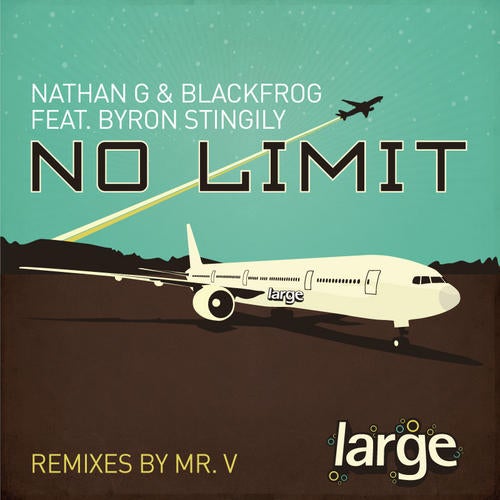 Large Music officially announces one of the most anticipated and acclaimed releases in our 16 year history: "No Limit" from Nathan G & Blackfrog feat. Byron Stingily. For dance music aficionados and historians, the name Byron Stingily ranks at the top of a list of elite artists who originally shaped the sound we now have come to know as House Music. As the lead vocalist and founding member of super group Ten City, Byron's characteristic falsetto has graced such classics as Devotion, My Piece of Heaven, Foundation and That's the Way Love Is just to name a few. We are honored to contribute to his enduring legacy with this electrifying new release.

On production credits we feature Australian-based artist Nathan G, who is currently riding the buzz from his "Melbourne Shuffle EP" on Salted Music. Nathan teamed up with fellow Australian composer Blackfrog to create a passionate and spirited production to compliment Byron's soaring vocals. Nathan offers up several mixes to chose from here, all with a slightly retro vibe but still punchy enough for peak hour.

For the remix duties Large has invited the NYC House Master himself, Mr. V. As a producer, remixer and DJ, Mr V. is firmly established as a top tier talent on a global scale. His remix package reveals why he has become so popular; his remixes feature timeless production laced with jazzed up keys and funky rhythms and bass. V also stretches his underground muscles and works out a deep, driving dub for late night audiences.