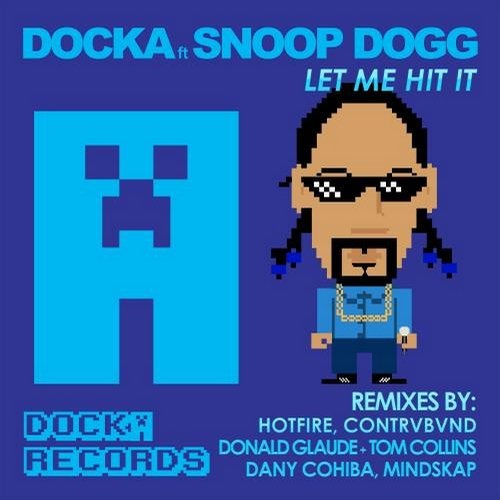 Following the 4th release on DOCKA Records by HATERADE which topped the Beatport charts reaching #4 in Trap, #1 in Breaks and #47 in the Top 100 releases. The story about an alien (DOCKA) from outer space coming to save dance music from its eminent destruction continues with the label's 5th release, produced by Southern California's DOCKA featuring the lyrical genius Snoop Dogg titled "Let Me Hit It". Inspired by Snoop's flow, DOCKA's future bass stripped approach grows throughout the track into a slowed down breakdown with just the right amount of hip hop elements which wind back up into a proper drop. Remixed by a handful of unique global artists, HOTFIRE who are fresh off successful releases on Nightbass and Perfect Driver, take the reigns first with a pitched down tech house mix and a deep vocal twist. The legendary Donald Glaude teams up with Tom Collins tapping into a bouncy, bass filled nu-disco rendering with reverb heavy, space filled breakdowns. Coming strong with the filthy trap, CONTRVBVND does not hold back as they 'hit it' hard with heavy bass & horns ready for big rooms and festivals. Ready to be enjoyed under the sun at every poolside mix session, Dany Cohiba's chilled out mix comes all the way from Spain with a chord filled breakdown and a catchy melody on the keys. Topped off for your listening pleasure is the upbeat, percussion led, minimal tech remake by Mindskap out of Portugal. In addition to the great music pack, "DOC005 - Let Me Hit It" is accompanied by a developing story with each release, provided by Los Angeles based television and feature film writer, Russ Taylor. The story goes live on www.DockaRecords.com on the release date. Distributed By Symphonic Distribution - www.symphonicdistribution.com