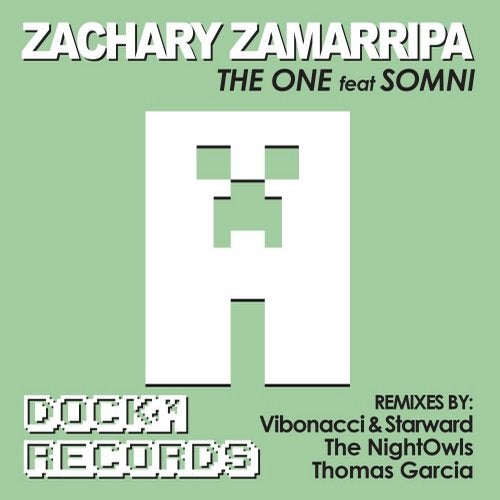 Continuing on the hunt for the next charter after 4 back to back releases charting on Beatport in multiple genres, Docka Records presents the next in the series. Enlisting production guru Zachary Zamarripa along with Somni who delivers a strong vocal for their house music masterpiece, "The One", the track is reminiscent of a classic house music jam complete with a finger snap solo and big chord pianos. With Zach's most recent album "Outrun" released on Black Hole Records having received large support from Above & Beyond, Don Diablo and a ton of others, "The One" is slayed for sustaining such success.

On the remix front, having recently finished remixes for JES + Austin Leeds and their 1st original track 'Da Chug' released on System Recordings, Vibonacci & Starward deliver a heavy tech house remix utilizing "The One" as a basis for a dark yet chuggy track. Brining a techno edge to "The One", Toronto based producers & label founders of Parliament House and China Club Records take select parts of the vocals and patiently grow the elements with a wobbling rhythmic bassline. Recent Icon Collective graduate out of Los Angeles with some heavy production surprises up his sleeve coming for 2017 jumps into a deeper mix of the pack properly reppin for LA.

"The One" will be accompanied by the next chapter of the developing story to Docka's experience on Earth, provided by Los Angeles based television and feature film writer, Russ Taylor. For the story, head over to www.DockaRecords.com on the day of the release or contact us directly for a sneak peak! Distributed By Symphonic Distribution - www.symphonicdistribution.com

The One feat Somni