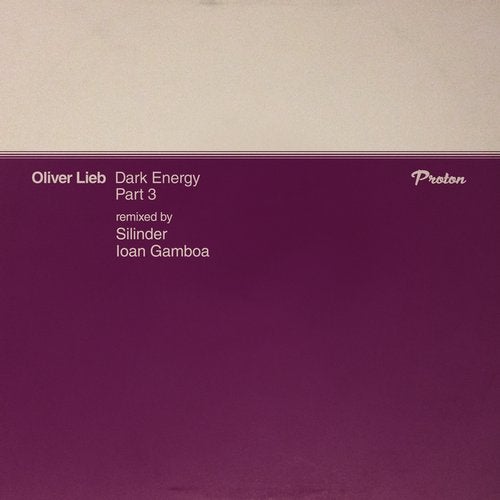 Oliver Lieb and his twin-track "Dark Energy" EP provided a typically high-calibre pair of techno masterpieces that lit up post-Christmas blues with a golden techno glow. Having recently launched a third in a trilogy of downtempo albums, Lieb now returns to Proton Music as a second encore of remixes take centre stage with Ireland and Germany's finest acting out their parts.

Gavin Mulhall and his Silinder alter ego have stood the test of time with effortless ease since first bursting onto the scene mid-way through the 2000s. With James Zabiela picking up a pair of remixes from the Irishman's production portfolio and a subsequent release on Renaissance, the Silinder name became a force majeure. A clutch of recordings on Stripped towards the turn of the decade cemented his name in the underground scene, before hitting the headlines once again with a remix of Spooky's "Little Bullet" in 2010. Played and supported around the globe by no lesser light than Charlie May, "Opiate", released on Hernan Cattaneo's Sudbeat imprint, kept the bandwagon rolling while a second appearance with Luis Bondio on 2014's "Sudbeats Volume 2" is testament to Silinder's continued prominence.

Long-term friend to Proton Music, remixes of Lank, Biologik and Paul Hazendonk opened the door for two original EPs in the shape of 2012's "Corrupt" EP and 2013's "Solas" shining a very bright light on Gavin Muhall's talent. As a third, "Basement" EP entitled prepares to grace the Proton catalogue, the Silinder remix of "Caldera" instantly provides evidence of Mulhall's trademark rhythmic expertise. A deeply felt groove shakes the earth to its foundations laced with light percussive phrasing, while smooth, rich melodies meander across the sonic landscape in contemplative fashion. Intelligent echoes of Lieb's orignal are a constant reminder of masters at work.

Ioan Gamboa's path to production enlightenment has taken the Spanish artist on a journey that has seen him set down roots in his Berlin studio. Mesmerised by the "flowing" energy of the city, and constantly working on his production sound, the "Spiral" EP on Cattaneo's Sudbeat launched Gamboa into an orbit that has seen him gather global support with John Digweed, Nick Warren, Henry Saiz and Cattaneo himself, all playing the Spaniard's music.

Somebody's Story, Stripped, and Balkan Connection have continued to accelerate Ioan Gamboa's dominance in the modern underground dance scene but it is with Particles that he has continued to forge a strong relationship. Over 35 credits sit next to Gamboa's name including a clutch of stand-out remixes and 2012's thematic "Fire and Ice" EP. The recent "Vibrations" album further demonstrated Gamboa's production repertoire with eleven tracks of electronica and techno verve. Continuing the techno foundations of Oliver Lieb's original, the Ioan Gamboa remix of "Caldera" drives relentlessly forward with strong beats and metronomic percussion. An expanding, pulsating pad provides tension while a soft underlying motif and melody swim atop to provide a seductive finish.

A white-hot cauldron of sound from Silinder and Ioan Gamboa have seen Oliver Lieb's "Caldera" once more dominate the sonic landscape.