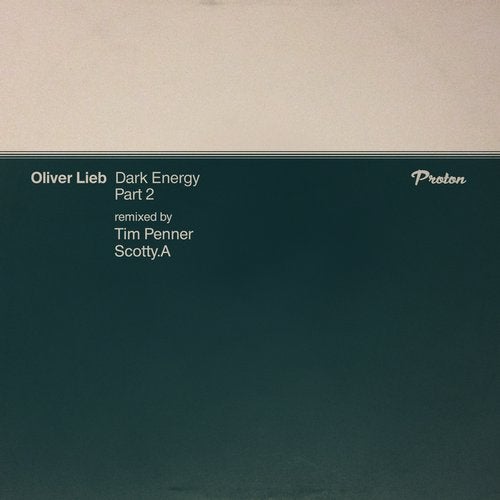 German legend, Oliver Lieb needed no introduction to the techno cognoscenti when he joined the Proton Music roster at start of 2014. Already a producer of considerable repute, his powerful "Dark Energy" EP thrust forth with pulsating precision, returning now to Proton Music for the first time with a pair of remixes from two of the brightest shining stars of 2013 as Tim Penner and Scotty.A now revisit Oliver Lieb's Proton debut.

Canadian born Tim Penner's decade-long experience working in the electronic music industry has afforded him a unique perspective on the production process. Driven by a passion to derive innovative sounds from the manipulation of frequencies, Penner has been able to generate a unique style loosely based upon the blending of themes inherent in the techno, house and trance arenas. Genre-defying in its classification, his work has graced a host of leading labels including, Replug, Stripped and Flavorite with a clutch of credits also found on the Konstrukt imprint he runs with Brazilian rising star, DNYO.

A quartet of remixes including Lank and Dousk have confirmed Tim Penner's undoubted talents on the Proton roster while the twin-track, "Pyrogen" EP was a sublime techno highlight, representing Penner's debut solo release for the label. With a second EP, "The Tunnel" set to follow in the coming months, Tim's remix of "Dark Energy" cleverly captures the themes inherent in Lieb's original as the thumping vibrancy so integral to its core is built upon with his trademark flair for bouncing, effects-laden placement that sweep across the stereo spectrum in dizzying fashion. A dominant beat and regimental hi-hats keep the energy high as Lieb's lead motif is given a dynamic new treatment, surrounded by unrelenting rhythms.

UK artist Scott Andrews, operating out of the cathedral city of Norwich, has been a revelation since winning a remix competition for Denis A's "Heroin" on the Russian's DAR imprint. An accomplished DJ in his hometown since the turn of the millennium, further recent successes in the live arena have seen him perform at the John Digweed "Bedrock" night in London and Sasha's "Last Night On Earth" New Year's Eve gig at the capital's famous Brixton Academy. Over a century of Beatport production credits have been simultaneously amassed as a cross-genre style has seen Scotty provide best sellers for ARVA, Visceral and Axon, supported by such leading lights as Hernan Cattaneo, Barry Jamieson, and Tvardovsky.

A rapidly rising star in the Proton firmament, Scotty.A's first remix of Nick Stoynoff in 2012 was followed by two masterful solo EPs in 2013 as "The World Turns" and "Natural Senses" releases provided commercial success. 2014's recent, "Expressions of the Soul" cemented further triumph and confirmed a special rising talent. Remixing "Caldera", Scotty.A's richly textured offering is a joy to behold. Light shaking rhythms glide effortlessly across a path laden with percussive groove, vocal cut and an evolving rhythmic pad that warms the soul. As it develops, an ethereal lead line provides an emotive ambience, combined with liquid arpeggio that rises and falls in panned and filtered subtlety, expertly hinting at themes integral to Lieb's original.

With two new remixes from Tim Penner and Scotty.A, Oliver Lieb's "Dark Energy" has plenty of power left in its power-packed cells.