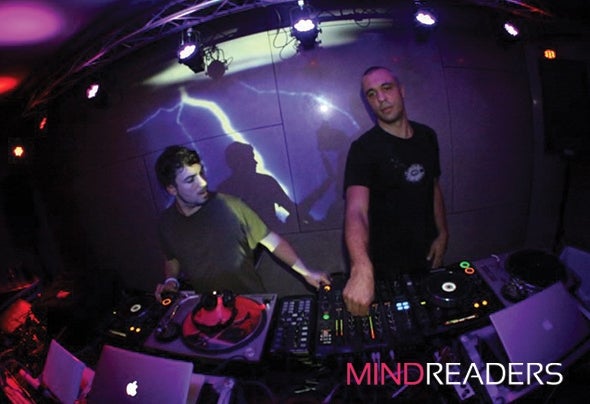 MindReaders* project is the unique union of two friends, Fred H. and William Wild, both a must of the north France club scene for over 15 years.After countless events working alongside either as Djs or coordinators, those pioneers of the club scene finally get together to produce their owns ound.Initiated by Fred H. for the launch of its double pack on the English label Primary Recordings followed by the launch of a title for the Dark Dog compilation mixed by David Maltese (Gravity- Rex Club), William Wild logically joined MindReaders in 2008, as the need to produce music together became greater.This union of Djs / producers whose styles are so different yet so complementary fathered the mix 'Ya tu Sabes' by Francisco Allendes (Cadenza) on Limonada recordings label, mix publicised by Tiefschwartz, Kolombo, Marcel Rosselot, Djul'z, Arnaud le Texier, Pepperpot. In 2010, their own single will also be released on Limonada recordings.By combining their knowledge of house and techno, Mindreaders offers a unique creation where beats meet brains and festivity meet vibrancy.Thus, highlighting their common references like New York and Chicago House and Detroit Techno.With numerous clubs and festivals under their belts (Villa Rouge, Rex club, Studio 287, Peniche concorde, Nordik Impackt 2&3, Astropolois, etc), their sets always receive unanimous response as they guarantee to mix with subtlety brand new sounds with rare ones for their electro culture and knowledge extend over 20 years.