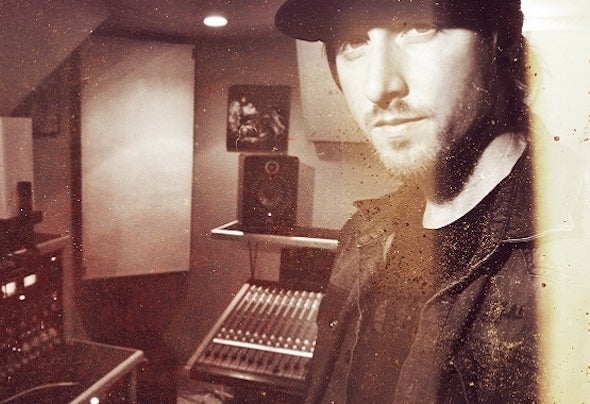 Celebrated on both sides of the Atlantic, its in the unassuming personality of futurist B-boy Hive that drum and bass finds its mightiest bridge between the UK and the US. His tracks have become staples of virtually all of drum and bass legends, from Andy C to Goldie, and make regular appearances on Grooveriders Radio 1 program--on which Hives towering Neo spent weeks at number one on the Five Mighty Rollers. Hives label Violence has registered sales comparable to Ram, Renegade Hardware, and Valve. He released a tremendous remix of Goldies and Rob Playfords The Shadow for Moving Shadow. Metalheadz has invited him to record an e.p. for the label. Hes toured worldwide, completing a month of dates in New Zealand and Australia in the fall of 2002, preceded by a month in the UK and Europe, which included a guest appearance for the Valve Soundsystem. No American has gained such complete entree into the heart of drum and bass. Hive came of age as a drum and bass producer in the late 90s, but hes long been active in underground music, with roots that extend deep into underground hip hop, embodied in a string of iconoclastic releases and credits that include recording O.D.s Beneath the Surface album, followed soon thereafter by his own first album Working with Sound, released on his own Mandala imprint. The album was largely centered around jazz-inflected instrumental hip hop, but glimmers of drum and bass flickering across the surface anticipated his forthcoming artistic development. It was on the strength of this album that London/FFRR signed him to an album deal. In 1998 he released Devious Methods, a hallucinatory fusion of hip hop and drum and bass. Lauded by critics in Urb, Spin, Raygun, Vice, and DJ Times, the album yielded the single Ultrasonic Sound, which ultimately made its way on to the soundtrack CD for The Matrix, which notched up double platinum sales, surely as much exposure as any drum and bass artist could hope forand beyond. Yet beyond is where Hive has gone. Concurrent with his album was the establishment of Celestial Recordings. The label was dedicated to exposing underground hip hop and included luminaries Freestyle Fellowship, Awol One, O.D., Fat Jack, and The Shapeshifters alongside Hives own tracks. From Celestial sprung Vortex, a label dedicated purely to uncompromising drum and bass. Vortex included releases by Dillinja, Tech Itch, Pieter K, Juju, UFO!, Sage, and of course Hive, and established itself as one of the premier drum and bass labels in the US, improving not only on the sound of American releases, but on the overall package as well, with first rate design, promotion, and DJ support. His The Raw Uncut project was a rousing statement for the label, its triple-pack vinyl and eight track CD release gathering new fans both in the US and in the UK, represented most dramatically by Moving Shadows licensing of three tunes for Killa Bites 2. A club night to complement the expanding profile of the label was the next logical step, and Hive and label partner Daddy Kev opened the west coast franchise of New Yorks venerable Konkrete Jungle. Named best dance club in L.A. by Rolling Stone magazine, Konkrete Jungle positioned itself as Los Angeles premier drum and bass weekly until it closed its doors in 2001. That same year, Hive and Kev dissolved Vortex, and Hive introduced his most recent label, Violence, which has exploded onto the drum and bass scene with ferocious determination. Featuring releases by Klute, Teebee, John Tejada, Gridlok, Keaton, Echo, Juju, and himself, Hive has steered the label into the vanguard of drum and bass. Since the inception of the label, Hives musical output has grown ever more assertive and daring, personified most clearly by Neo, one of 2003s great anthems. Neo has reached into virtually every corner of drum and bass, from dedicated ravers to disaffected breaks aficionados, binding fans of different stripes together in common cause. Hive has also been spending more time in the studio with collaborators, including Keaton of The Usual Suspects. The two of them were responsible The Plague, another massive anthem of 2003, released on Hardware. 2004 will see the release of their even more broadly appealing follow-up Bring it On, for Violence. Tough, propulsive, forged out of both the traditional sampled aesthetic and leading sound designs of contemporary drum and bass, the sound of Hive today bears the imprint of an artist searching for new ways to reinterpret the music by his own lights. Neither a retrospective purist, nor a follower of fashion, Hives music, his DJing, and his label strike a steely, inspiring balance, hewing closely to a tight creative vision that has propelled him into the forefront of drum and bass wherever it thrives.