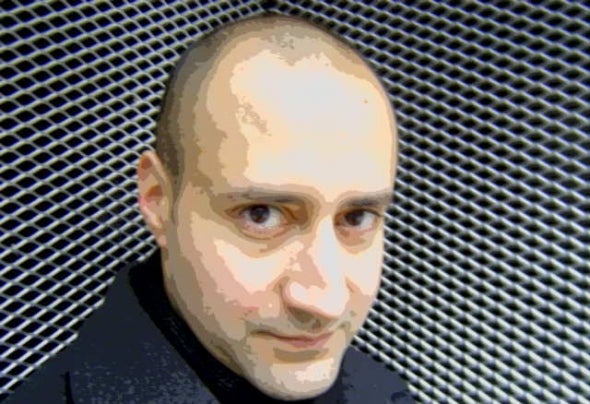 Palomo’s passion for electronic music spans the history of his deep roots in rhythm, sound, and dance. Playing the drums since the late 70’s and spinning vinyl through space since the early 80’s, evolving through the journeys of old school hip hop break- dance beats, Italo-classics, early electro, acid-house and techno, Driven by the amazing energy of techno music, Gabriel brings years of life experience and musical skills to the electronic music scene.His pre-teen style war beat street days as a breaker and graffiti writer a.k.a. Sez naturally led him to become a DJ, which he picked up easily after years of playing the drums since the age of six. In the early 80’s he discovered Kraftwerk and Afrika Bambaataa. Taking their musical messages to heart, Palomo became a renegade of funk, looking, searching, seeking, finding the perfect beats which led him to the early Detroit techno scene and Chicago’s acid house craze. In 1991, he attended many raves and began hosting some of the most craziest underground warehouse-loft parties in 93. He has since been playing an integral role in keeping Chicago's electronic scene on the map having organized events under his leadership of EnvironMental Sound Therapists, the Conjugate Projekt (best known for the unprecedented moving train party Motion-ness and Grant Parks Resonance parties), along with 773 Tekno Saturdays (w/ Tim Xavier), D:Section (w/ Meiotic), De:Form (w/ Friction Detroit and Infrastructure NY), In Your System! Event’s (w/ Blueline records and Majestic), Zuvuya and now Linear.Driven by the technology of the past, present and future, he established Zuvuya Recordings and launched the Galactic Tone series as a vehicle to share his concepts and ideas thru music. Launching the Galactic Tone Series with the Magnetic EP - featuring Palomo and Tim Xavier, this release was well received with all around praise for both its driving techno syncopation and hard acid electro qualities. From positive reviews in BPM Magazine to making DJ T- 1000’s top 10 Chart, this was a strong debut for the label indeed. Zuvuya’s second release Lunar EP featuring the vocal industrial-electro single ‘Lunar Connoisseur’ with Lee Chameleon was charted on DJ Hell’s top 10, spun by Dave Clarke, Felix Da Housecat and Tommie Sunshine, licensed by Mauro Piccotto and Dj Hell for their CD mixes on Meganite and Time Warp, receiving radio play in the UK, Germany, and XM Satellite Radio, and praised with a 5-star review in De:Bug magazine Germany. Zuvuya Recordings was well received for its combination of driven techno, electro and industrial qualities.Remix projects from Palomo include The Horrorist "13 Dobermans" Tim Xavier’s 773tekno03 “AzeeeO EP”, Greg Kobe’s “Feel the Funk EP” for Tim Baker's Elephanthaus Records and Jeff Storms “Release 1 EP” on Edensonic Records. Palomo’s earlier releases include the sounds of “Oscuro” on Fresca Recordings and “Trouble One” on Mindshift Records.Palomo’s drive, skills and dedication have landed him DJ sessions at every major club in Chicago, events across the U.S., festivals and club appearances throughout the world - Mexico, Germany, Belgium, Slovakia, Czech Republic and Bulgaria.When out of the studio, and on the decks, Gabriel plays for packed venues of all sizes and types (including having played in a moving train car), Palomo is known to drop anything from techno to dark electro to tribal tech-house to old school acid tracks in any given set to keep the crowd moving and engaged, not missing a beat with flawless transition and key communication with the dance floor. Besides being one of the most respected DJs in Chicago and aside from headlining at many events, Palomo has played along side international Dj’s such as Surgeon, Function, Regis, Christian Smith, Speedy J, Chris Liebing, Marco Carola, Ken Ishii, Marco Bailey, Mark Verbos, Ben Sims, Green Velvet, Traxx, Joey Beltram, Mike Dearborn, Tony Rohr and so many other musical explorers, the list goes on and on.In between DJing and producing music, he remains an active contributor to Chicago’s electronic music scene and is currently preparing the launch of ‘Linear’ a Chicago-based techno label with many releases and events planned for the coming years. Palomo will continue to work hard from all angles to share ideas and contribute his part on a global scale. If you ever have the opportunity to witness him live, this warrior will definitely rewire some neurons with his skills and anthology of electronic grooves.