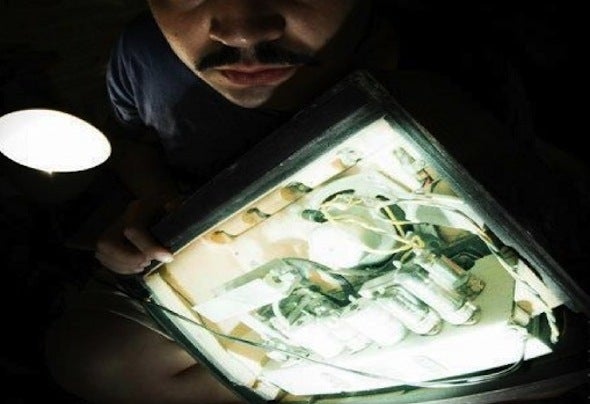 He comes from a large family of musicians. Since childhood, surrounded by instruments and diverse groups that marched on his house, always noted for his sense of rhythm and percussion skills. When he was 12 years he played drums in a punk group, the Beatles Spunk. Later, he joined a school of African percussion and started doing collaborations with DJs from the area while still pounding with his group. With Jazz as engine, and being 16 years old, he began to study Music Theory and scores reading for drums, combining all this with Conga Latin classes, cajón flamenco, darbuka, and so on. Years after sharing booth at a local club called VANLU, with many artists such as Javier López, Wavesound, Sowing Paranoia, Makoki, Méndez, etc., his first creations appeared in Beatport, Beatsdigital and some Net-Labels. In 2008 when he was 23 years old, the famous ECHOPLEX, with its dizzying Polish label, SOLEIL RECORDS, entrusted in his sound to make a compilation with artists like: Pacou, Damon Wild, Wavesound, Djorvin Clain, Taku Yamashita, Roberto Bardini, etc., counting on a total of 22 tracks, which would be then spread throughout the world. In a short time, he started to be broadcasted nationwide, through the best-known radio show in Spain: SIGLO21 in RADIO3. Locked in his study, with his countless variants of the freshest and purest Electronic music, he twists melodies towards infinity with his emerging and rather Retro-Digital works. One day, a Japanese events developer listened to him in SIGLO21 of RADIO3 and contacted him with the intentions to organize a party at CLAPPER, OSAKA (Birthplace of the Japanese electronic music). Having gone through some of the best clubs in Europe, continues his vertiginous career signing for “The Wireless Marionettes Label” bookinglabel, which counts with a place in the scenes of Valencia, Ibiza, Berlin and London. He has also performed at clubs such as 13 KALLES, SOMA, TOKORO CLUB, PRIMAVERA SOUND, MAMBO, DUBCLUB (Madrid), STUDIO 54 (Oviedo), COOL ROOM (Gijón), OHJU CLUB (Cádiz), BORA BORA (Ibiza), WEEKEND (Belgium), PLATINUM (London), LESSIZMORE (París), etc. Presently, he works with ALMOUKRI RECORDS STUDIO, playing an electronic role in that very peculiar label, that has born for all music styles, including: Jazz, Blues, Flamenco and other musics of the world. Blasmanjazz enjoys creating live electronic sounds, under his a.k.a. Blasphemist, with various drum machines, synthesizers, frequency modulators and analog percussions, producing an avant-garde and conceptual art fused with all sorts of instruments and offering therefore an impacting live show. He is currently the co-owner of Gramola.Rec, a high projection label that places its Techno, Minimal and House releases on the top charts, which is supported by important stars like Richie Hawtin, Laurent Garnier, Dubfire, Pig & Dan, Francesco Farfa, Magda, Max Cooper, Alex D'Elia, etc. It also counts with the collaboration of a large list of artists such as AnGy KoRe, Andrea Frisina, Lorenzo D'Ianni, Andrea Di Rocco, Greg Kobe, Alberto Pascual, Tex-Rec, Roland M.Dill, Mozambeat, The Seekers, Angelo S., Sasha Carassi, Seismal D., Alfonso Padilla, Alejo Loaiza, Javier Carballo, Audioprophecy, George Vala, Francesco Doni,