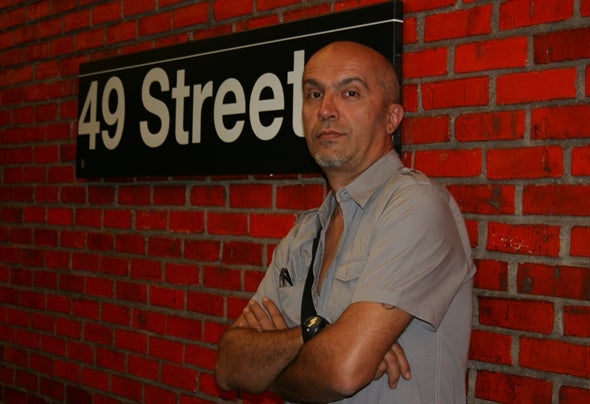 "We, The Family," or how to feel comfortable when you're close to whom shares our life experiences and artistic music passion, deep humanity and why not even a hint of lucid madness. "We, The Family," like feeling like one of the family,welcoming our personal visions and bringing out the best of us. "We, The Family," it’s Black Mighty Wax (aka Caesar, producer, DJ, drummer and IRMA records’ manager) brand new Album the follow up to his first Album ‘Groove To TheSky’ that came out a few years back on IRMA. The Album is Caesar’s vision of elegant Soul understood as a vintage sound but at the same time innovative, as an inner feeling tied to experiences and collaboration with those who manage tomake the message more directly (as suggested by the title). The album counts numerous International and Italian Guests, like with the opening track "Shake Your Heart" featuring the ever brilliant Sarah Jane Morris - an establishedartist but also Caesar’s friend and a music colleague of many years - the track digs into 90’s ‘Easy Soul’ influences, reminiscent of the classic Soul II Soul sound, with a modern freshness that will be often recognised in the Album as a trademark inthe arrangements. The "Family" is further enriched by the collaboration of the exceptional Italian soul singer Neffa,he lends here his great vocals on the warm atmospheres of the acoustic title track and on an another song as well, the solar"Music is everywhere", sung by Neffa with great energy and involvement. A leap into the Groove of yesteryear reminds us of Style Council, Arrested Development, Galliano. then between other genres when it seems we could be in Memphis,in the company of friends for a session of pure vintage soul: "In the summertime" - Ronnie McNeir’s gemstone - with the voice of Andy Rise then the dub of “A better place” with guest Ricky Philips on singing duties - and halfway downthe album a surprise Cover comes along “Losing My Religion” (REM's famous hit), arranged by BMW with a Detroit electro sound that makes it very current and sung with inspiration by Silvia Donati. The refined trademark, (highlighted alreadyin the previous album "To The Sky", that came out under the Black Mighty Orchestra banner) is back this time in "Let Me Go", which sees the collaboration of BMW with another old acquaintance of IRMA records, the Hammand maestroand acid jazz conosseur Gazzara, and with the soulful voice of the Dutch vocalist Lily Latuheru. In a similar way "Tomorrow will be the same", follows, with vocals by Alessia Piermarini whose harmonies reminds us of the Amercianstyle of singing. "We, The Family" also has a touch of acoustic with Brad Myrick guesting on guitar in "Sunset on Grinda" which comes after the grooves of "Follow That fellow", a cinematic urban funk with the voice of Jack Jaselli, "ManhattanSkyline" (guesting Piero Odorici on Sax) is a cover of MSFB that leads us straight to the golden age of the Sound of Philadelphia, "May in London" touches on jazz house and jungle jazz with the help of another "Family" member,thetalented pianist Maestro Garofalo. There is also a fascinating personal journey, shared here by BMW on the sexy and nocturne "Nightdriver", that sees the talented voice of De la Kyo giving her input and led by a harmonica that would makethe likes of: Donald Fagen, Stevie Wonder and who knows how many other ‘royal members’ will want to join this cozy soul ‘Family’.Dance Fllor tracks are also present in the Album in the two instrumentals: "Like a Lake" (with Black & Brown, his t o ric IRMA records’ Group) and "pull down" – (Both Tracks are included in t he Album in bot h Radio Edit and Remix versionsby Alien Trick and LTJ X-Perience), just to demonstrate BMW’s long experience on t he Mixing Decks and in t he studio, in particularly on the house, electro and minimalist scene but remaining on the Soul / Funk vein.