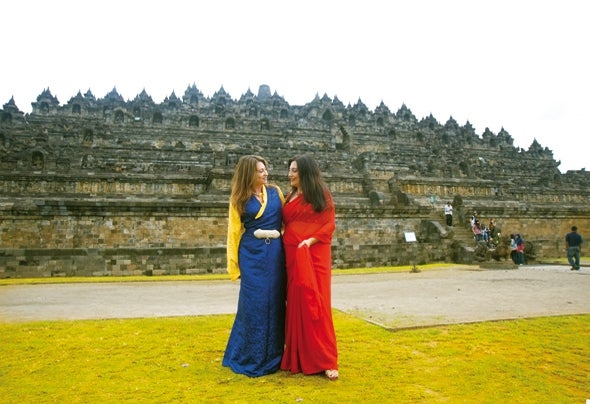 The Project UNITED PEACE VOICES starts in 1996 as an artistic and religious experience within the walls of the Milan based Bhuddist Centre ‘Kumpen Lama Gangchen’, a spiritual place dedicated to research, word spreading and a worlwide peace aspiration. United Peace Voices is the expression of the meeting between the Tibetan Lama Gangchen Rimpoche and Allen Ginsberg, the most important Beat Generation’ Poet. United Peace Voices represent the ideal meeting point between digital sounds and a deep spirituality, which over than a philosophical creed, brings on the contemporary music scene The need of a social knowledge. The Project formed by female voices wit h int ervent ions by t he Lama Gangchen Rimpoche and Lama Michel Rimpoche, dedicates all their compositions to subjects, ideals and teaching of Tibetan Bhuddism. In 1997 this passion and commitment materialise with the first self produced Recording ent it led ‘Shide’. In 1998 t he Project is invited to participate at the ONU Building personally invited by the then Secretary, Kofi Hanan, with their concert as the Opening of a very importantcelebrat ion. In 2001, t he collaborat ion wit h IRMA records starts and with the strong participation of Irma’s most important producers their Second Album “Zamling Shide” see the light, the Album It’s very well received both by music Critics and Listeners and it went on selling very well for many many years. The third Album 'Words of Buddha', came out in 2007 in collaboration with Life Solutions Wisdom And it had a strong editorial distribution. Their new Album, the fourth, is called “Sound of Peace”. Will be released by Irma Records in July 2012 and will be available through the traditional distribution an all the best digital stores, again it’s characterised by electronic contaminations, as : breakbeat, house, lounge and bossa. Amongst the Artists that have collaborated lending their Production skills in the making of this Album we have United Peace Voices themselves, Ricky ‘Ohm Guru’ Rinaldi, Ninfa and Supabeatz, Chris ‘X-Bass’ Lisi, Submantra and Meastro Garofalo. In this new work, the ancient Tibetan mantras are often mixed with original lyrics in both English and Portuguese to be able to give the international listener a full idea of the subjects treated in this Album: inner peace, the most solid fundament for peace in the world. United Peace Voices it’s the only Group in the world in this genre that has managed to spread a spiritual message in a way both modern and easy to be recognised by everyone. Useful Links: facebook.com/unitedpeacevoices kunpen.it helpinact ion.org