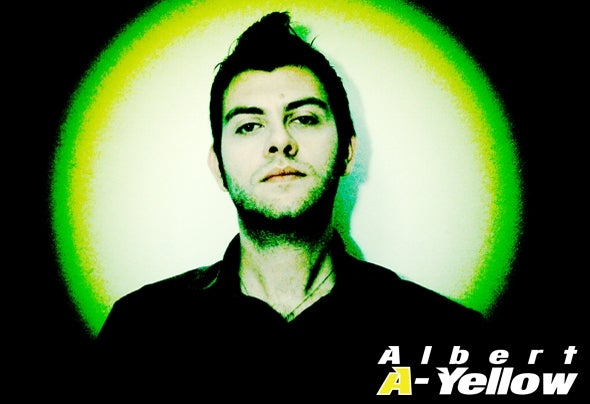 Born in 1984 in Milan, where he still lives and has his own studio, Albert A-Yellow (real name Alberto Aiello) discovers very quickly his love for music. Since he was a child he started playing basilar songs with his little keyboard gifted by his family, without a technical preparation or musical score, but only hearing and reproducing them. His natural predisposition led him to learn by himself playing guitar and bassguitar. As a teenager, Alberto discovers electronic music and, attracted by that and by its enchanting and unnatural sounds, starts producing simple tracks with a basilar sequencer and few years later buys his first decks determined to become a dj. After the first small parties, Alberto is noticed by a big event agency and has his chance to prove his ability. In few years these technical abilities, combined with a smart music selection, lead him to play live sets in the most important clubs in the Northern Italy such as Rolling Stone, Amnesia, Bolgia, Alcatraz, Live Club, Florida, Mazoom and many others. His sets hit the clubbers for their leading electro mood developed with techno and progressive basis but especially because Alberto produces a lot of the tracks and remixes he plays deciding to keep them unreleased, only dedicated to make his live sets unique. After a degree in law, Alberto decides to dedicate his entire life to music. He creates his alias Albert A- Yellow and starts working with Yves De Lacroix (met many years before) and Fabio XB, one the most important trance artist in Italy. Its not simple to demarcate the boundaries of Albert's style: his tracks and remixes range from trance progressive to hard techno passing from electro house. We can say his trademark is the contrast between harmonious melodies and heavy synths and basslines. These skills makes Albert A- Yellow one of the most interesting Italian producers rising in EDM.