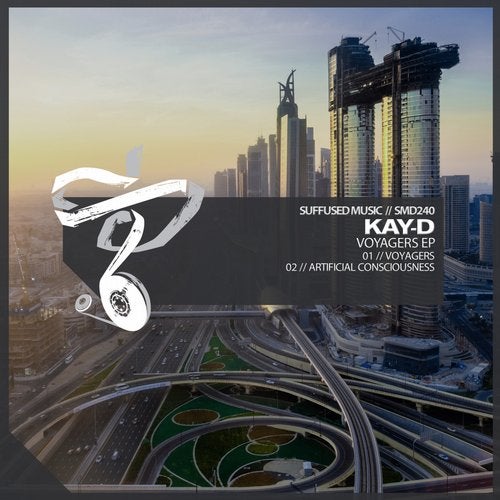 Continuing a rich seam of impressive releases across over six years, Suffused Music sees Kay-D return to the label with a new and original twin-track EP as "Voyagers" becomes the 240th release on the label.

From the ancient city of Ajka in the east of his homeland, Krisztian Kajdi has overseen a decade-long career in the underground dance music scene with his Kay-D production moniker. Borne of classical influences and three years spent at the conservatoire specialising in the trumpet, the Hungarian artist was inspired by the explosion in dance music across Europe in the early 1990s. Working initially with his renowned nephew, Karanyi, and building an understanding of modern synthesis and computer production techniques, Kay-D's nascent career began with the "Mysteries" EP on CLS Music in March 2008.

Almost 500 production credits later and the Kay-D name has been writ large a cross a host of blue-chip imprints that include almost a double century for Michael and Levan and Stiven Rivic's Mistique Music and three full-length albums. Furthermore, Kay-D has been a regular on the likes of Stellar Fountain, PHW Elements and Majestic Family Records, while co-hosting the monthly "Mindfields" show on Frisky Radio and performing live across his native Hungary and nearby Czech Republic.

A remix of T-Dallas in September 2013 opened Kay-D's account for Suffused Music before September 2015's "Eternal Sun" saw a standout original track and remixes from Reflection Soul and East Café. Now returning with a pair of new original tracks, the "Voyagers" EP opens with the driving rhythms and machine-gun fire bassline of "Artificial Consciousness". Full of progressive hallmarks, luscious pads and sumptuous vocal waves wash over the seven-minute track in trademark fashion. Building relentlessly, a scintillating arpeggio sequence is added at the mid-point alongside an angular motif to create a multi-faceted track that is sure to find favour across European clubs.

The more laid-back title track is a pulsating affair that luxuriates in side-chained pads and emotive chord progressions. A cadenced bassline adds to the depth and head-shaking groove while Kay-D's penchant for melodic phrasing can be heard throughout the eight-minute piece. Filmic vocal samples that link to the "Voyagers" title add further depth to a heavily stratified and carefully programmed work that reaches its melodic height at the stripped back breakdown. Opening up again into the second half, a hypnotising rhythmic foundation is the perfect vehicle to showcase Kay-D's impressive production credentials.

Returning to Suffused Music, Kay-D opens up a new pathway to success with his "Voyagers".