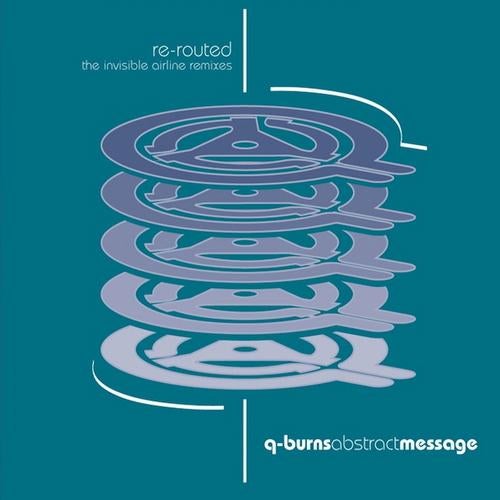 Top electronic music producer, artist, and DJ Q-Burns Abstract Message (a.k.a. Michael Donaldson) presents Re-Routed, a remixed version of his popular 2001 album Invisible Airline . For Re-Routed, Q-Burns Abstract Message has taken a number of his friends, all well respected DJs and producers, on the the trip with him. Remixed underground hits from the album include the Lisa Shaw track "Shame" which has been reworked electro-stylee by Swedish producer Hakan Lidbo, known for his current excellence in the tech house scene with releases on labels such as Paper and Loaded as well as his ground-breaking work with the late 80's acid jazz pioneers Solid State. Hot off his Hooj Choons release "Drums 4 Better Days", (Michael) Lovesky gives Lisa's "Innocent" a deep sexy house reworking while world renowned Philly spinner King Britt gives it a super spare minimal house redo. The third Shaw track "This Time" also gets two work outs: a rocking latin house jam by (Pete) Rivera Rotation (returning the favor Q-Burns paid him remixing his hit "On The Beach") and a full on electro mix by Q-Burns Abstract Message and a fellow Floridian , Hallucination Records artist Grumptronix. Other super talents that have boarded for Re-Routed include Eighteenth Street Loungers Thunderball, midlands duo Funky Transport, the Russians of Pork Recordings, Tetris, French breaks pioneer and the first DJ on the moon, doctorolive, and prolific Nottingham DJs Neon Heights.

Q-Burns Abstract Message gave several reasons for the release of this album of remixes. "Well, so many of my friends did these great mixes and we weren't able to put them all out as 12" singles. We wanted people to hear them so we are thrilled to be able to put them out as Re-Routed. There is such depth to the vocals that people were just clamoring to mix them, so we let 'em," he added.