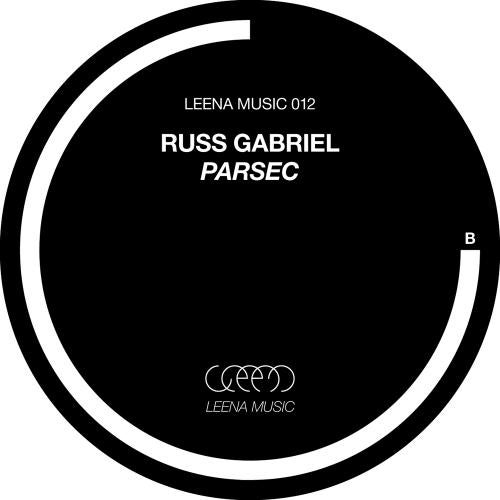 For Russ Gabriel, subtlety is the name of the game. Always maintaining a passion for sound and synthesis, Russ Gabriel’s elegant sonic constructions are built on slowly shifting modulations and have established himself as a name synonymous with UK techno. Since the inception of his career, he has recorded for nearly all the major techno names of the 90s
including Peacefrog Records, Soma Recordings, his own Ferox Records, and Planet-E (on which he released his legendary remix for Carl Craig’s “At Les”).
He joined forces with mobilee in 2008 with his release entitled “The Fall Guy” and now he’s back with a release on Leena entited “Parsec”—or for those of you who skipped science class,
the equivalent of 3.26 light years. The aptly named A-side takes its time as well, with clicky, bleeps of melody that wobble to-and-fro, constantly fading in and out on incredibly minute levels as the track calmly progresses as a comfortable pace. Muted snare drums, rattles add diversity to the environment as the synthesizers force their way in from the group up. “Sat Vremena”
(or “hour” in Serbian) utilizes the aforementioned tropes for which Russ is known while futuristic effects permeate the backdrop. A singular high-pitched drone maintains continuity until a wave
of static marks a transitional point as the track winds down and breaks up into its constituent components.
Myspace.com/leenamusik