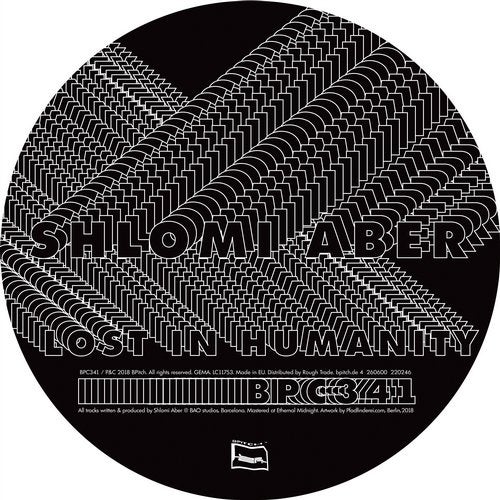 Shlomi Aber has been a driving force in house and techno for almost a quarter of a century now. Having rst stepped up to the decks at the young age of 14, he received classical music training and worked in a record store in his native Israel as a teenager before eventually becoming one of the countrys most forward-thin- king producers. With his debut EP »Lost In Humanity« on Ellen Alliens BPitch Berlin, the Be As One founder presents his rawest material to date - energetic yet murky techno for basement raves drenched in sweat and chemicals.On »Lost In Humanity«, Shlomi Aber wastes exactly zero time to welcome his audience to the dance oor: »Redox« unleashes a mu ed but relentless kick drum that is being complimented by a gnarly bassline and hard-hitting percussion work. If tunnel vision would make a sound, this would be it. The title track picksup on that but injects more melancholy into the picture. An elegiac and siren-like synth line oats over a minimalistic beat that seems restrained at rst, yet becomes more and more hypnotic as the track slowly unfolds.Contrary to the cavernous and mighty sound aesthetics of »Lost In Humanity«, »Etiquette« opens the ipside as drily as it gets. While a psychedelic vocal loop takes the limelight, its Shlomi Abers masterful dialogue between kick, hi-hat, eerie echo e ects and spooky, theremin-like synth lines that makes this an exceptio- nal excursion into the psychotic qualities of contemporary techno. With »Blackout« then, the EP reaches a late climax. The closest thing to a bigroom-ready track this massive four-tracker has to o er, its based ona forceful groove punctuated by hissing hi-hats. The swirling, choral-like drones only add to the menacing atmosphere.If the EP title »Lost In Humanity« wouldnt already spell out an implicit fatalism, it should be clear as daylight that these four tracks are best enjoy in total darkness with a side of desperation.