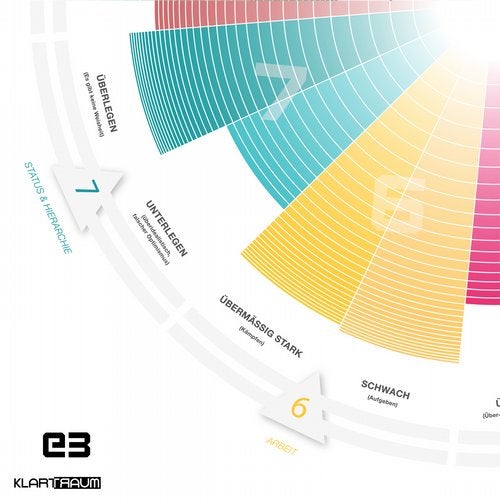 E3 is the 3rd part of Klartraums series that is being released at quarterly intervals throughout this year. Here the E in E3 stands for Enneagram, which is a way to classify which personality type you belong to. In other words, it describes which lens you see your reality and in which stage of your personal development you made this decision. This philosophy is derived from the teachings of Quantum Psychologist Dr. Stephen Wolinsky, a huge inspiration to the Klartraum paring of Nadja Lind and Helmut Ebritsch, even to the extent of sampling his seminars, such as on Aaron or through their live performances. By the end of the year the 4 parts will converge into a whole album where, all 4 cover art segments will be merged into one full Enneagram. For now, we dip down into this third part, where we see Klartraum walking the fine line between deep and club like only they know how to. No balance beam, no safety net, complete mastery. The EP kicks off with key cut Drama Queen, it swings and wiggles before developing with a 70s detective mystery edge. In a similar vein, if every so slightly more noir-ish, Flight To Berlin (Flight Club Live Mix) exudes introverted atmosphere thanks to the wistful muted trumpet - provided here by AKA AKA collaborator Thalstroem - and those signature Klartraum velvet keys. Then, for those wishing to completely lose themselves in the moment, you could do no wrong in heading to the full version that props up the end of the EP, where the track is reduced down into a slow churning dub maelstrom, running in at an epic and emotional fifteen minutes long. This then leaves Dark Space Night, abandoning the sleazy speakeasy mood for breathless dub techno momentum. This is the bread and butter of Klartraum, merging light and dark simultaneously in one continuous movement. Klartraum E1 and E2 are already available, E3 will hit the streets in September, and keep your ear to the ground for the emphatic finale later this year.