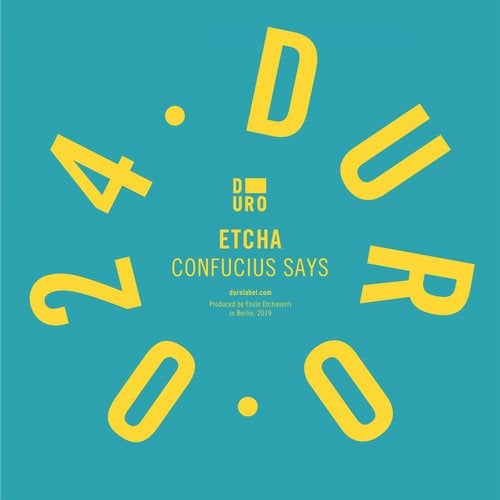 Duro ejects into the second part of the year with Berlin-based producer Etcha delivering his sophomore release on the Mexican imprint; an astronomical adventure entitled 'Confucius Says'. These 2 new exciting original cuts are filled with inter-planetary bleeps and grandiose pads, that along with remixes from Marvin & Guy and Bird Of Paradise make an outstanding pack for the late-night record spinner. Currently at the forefront of a new generation of Berlin producers, Etcha has also appeared on labels such as his own Exoplanets, Voll Schön, and more.

The trip starts with "Confucius Says", where a mystical, astral melody synth carries us along with a muffled Italo bass, as if we were traveling across a dense nebulae of sound on board of a retro-futuristic spaceship piloted by small green mysterious creatures on glittering space suits. Bird of Paradise takes this to paranoiac territories: an insistent, rolling bass makes us realise that moment where we have landed in a strange, remote planet, while danger seems just ahead us.

"Operation Oskar Panizza", the second original track, prepares us for battle. The snare-propelled-guitars are our weapons against the fatigue derived by a night full of wonders and chuggy basslines. At the end of the expedition, Marvin & Guy brilliantly push us into a new arpeggiated journey, right into the middle of the after-hours galaxy.