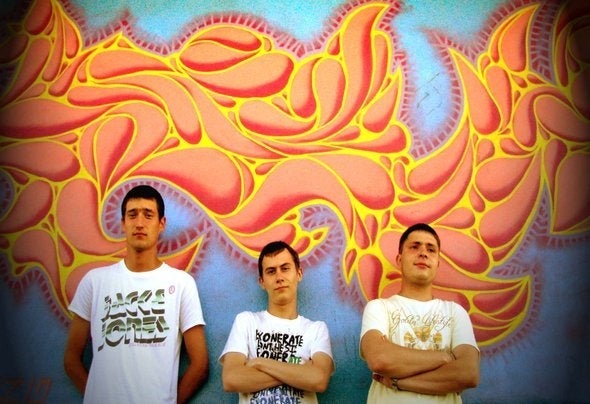 Under This is one of the most significant Breaks band formed back in 2003 by the guys who were keen on broken rhythms from their childhood. At the beginning of their career Under This also took active participation in promoting Breaks music in their home town - Daugavpils, which culturally is a capital of Latvian Breaks scene. Being citizens of Daugavpils, guys got under strong influence of the Nu- Skool Breaks since the mid 2000s, just after their first visits to legendary night club 'Banzai', which was famous for itsbig Breaks events with acts from guest DJs such as General Midi, Hyper, Elite Force and Autobots to name a few. Grown on music of The Prodigy, Chemical Brothers and other giants of electronic music scene, these guys have absorbed all the elements of banging sound to form their unique style. Blending the vibes of early 90`s Rave anthems, mid 90`s Big Beat, 70`s Disco / Funk and even 60`s Rock`n`Roll with the modern sound of Bassline and Progressive Breaks Under This are always unexpected with their musical innovations.After their official debut release on Distinctive Records back in 2008 Under This in a wink got support from many famous DJs and producers of Breaks as well as of Trance scenes and became one of the most promising Breaks acts. Keeping their hard work and real passion to music production in the next 2 years guys signed exclusive contract with iBreaks Records. That’s became a very significant point and beginning of the fast growing career for them. After serving successful apprenticeship on iBreaks Bass since 2010, Under This have stepped up to the main iBreaks label in early 2012, already having 5 EPs reached the Top10 at Beatport in their back-catalogue. Since that moment Under This became one of the most demanded Breaks projects. With their hits such as ‘Funqualize’ (anthem of the Summer House 2012 festival), ‘Hands On You’, ‘Stay Away’, ‘What I Need’, ‘Yestreday’, ‘Dancing Right’ and the bunch of top charted remixes, Under This firmly anchored in the leading projects of Breaks scene.These days Under This keeping their hard work in the studio on new stuff, touring around the Europe and running their own label Expand Records (Breakspoll 2013 – Best New Label Top5 nominee). Under This music is frequently played by the DJs such as Paul Oakenfold and The Crystal Method, which shows real respect and massive attention to their production, not only by Breaks lovers, but also by major dance acts.