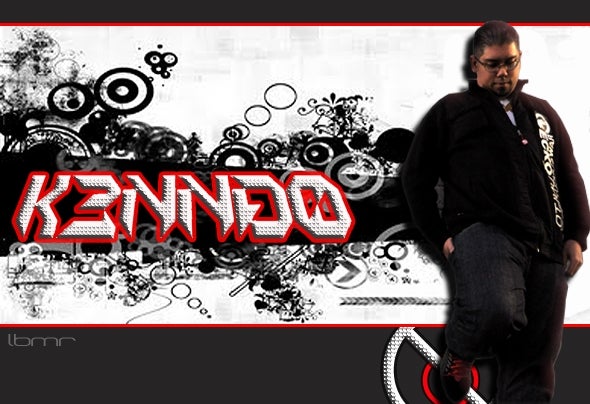 A DJ and Producer from Southern California, K3NND0, started DJing when he was a teenager. His music influences came not by bands and singers, but by turntablist and breakbeat inventors. Hearing producers like, Kool Herc,and Herbie Hancock's hit song, "Rockit," made their mark with K3NND0. His production style evolved from hearing early melodic house music tracks like, Mr. Fingers, "Can You Feel It," and the acid house classic "Acid Tracks," by Phuture. His influences show in his style with his selection of house, tech, progressive and electro music he plays and produces. And to not forget, he also continues to sneak in a turntable performance at a few gigs as respect to his influences .During 2008, K3NND0 made use of his down time taking apprenticeship with several live sound engineers in the Los Angeles area. Realizing, he could improve his sound during his DJ gigs, K3NND0 continued to learn live sound engineering until he was introduced to a recording studio. He later became involved, and an intern, with several private recording studios. K3NND0's knowledge continued to grow as he learned how music is recorded, composed, and structured. Producers quickly took notice of his ear for electronic sounds and beats, this lead to his mentorship and study of electronic music. Also, this opened his network, getting him many DJ gigs in the Los Angeles and San Diego areas.In 2010, K3NND0, worked behind the scenes with a music studio in Lancaster, CA, producing and engineering hip-hop, R&B, and club tracks for several artist until the studio's closure in early 2011. With the help of a non-profit organization, K3NND0, later had it re-opened (and re- designed) under a different name, and became the manager and resident sound engineer. At the same time, K3NND0 was the DJ for the underground hip-hop group Sick Calicos, performing with artists such as the members of The Wu- Tang Clan, Sly Boogie, and Yelawolf.K3NND0 has performed at several popular venues such as, Fluxx in San Diego, The Industry Theater in Lancaster, CA, The Observatory in Santa Ana, CA, The Terrace in Pasadena, CA, and 118West in Simi Valley. In Los Angeles, he performed at Busbys (aka. The Congo Room), The Belasco Theater, 333 Live, and Dim Mak Studios.May 1st 2013, K3NND0, was signed to Lets Beat Milo Records with the DJ electronic trio, Cod3w0rd Korruption (DJ Will::E, Chris Steele and K3NND0). He currently works with several of the group's projects and album releases. Their first EP with the group called, "Tower," was released June 7th, 2013, with the radio edits going world wide June 14, 2013. A few months later on August 2nd 2013, he released "Sharp Objects," with Cod3w0rd Korruption partner, DJ Will::E, on Keoki Records.K3NND0 continues to DJ and produce with Cod3w0rd Korruption, and for his solo projects. Described as a "Secret Weapon" of the music industry, he can also be found as a freelance sound engineer hired under several artist, producers, and movie studio's part-time.