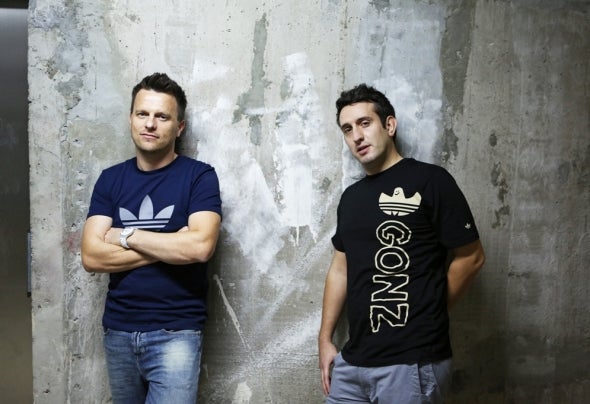 Hollaphonic can be described as nothing other than aglorious meeting of like minds, drawing influence from a vastarray of musical genres. T he Hollaphonic duo was formed in2012 when Dubai based heavyweights Greg Stainer andOlly Wood joined forces in a move, which is a first for theregional music scene. T his is officially the first ever dancemusic duo to be signed to a major record label in the MiddleEast.Both Olly Wood and Greg Stainer have an extensive historyof their own. Greg's achievements to date include two Goldselling albums, a discography of over fifty productions andremixes on record labels such as Hed Kandi, CR2, Stealth,Loudbit, Seamless, Pacha Recordings and Universal as wellas a full length solo Album "6mil 2headphones". Support forGreg’s productions and remixes come from some of themost influential names in the business including RogerSanchez, Groove Armada, Dubfire, Mark Knight, AlexGaudino, Sister Bliss, Axwell, TocaDisco and Erick Morillo.Olly on the flipside has honed his skills as an MC over theyears supporting artists such as Coldplay, Ne-Yo, BustaRhymes and Deadmau5, alongside a much heralded guestappearance with UK dance music heroes T he Dub Pistolslast year at Bestival, one of the UK’s premier outdoorfestivals. In recognition for being a consummate liveentertainer he is sponsored regionally by global brandAdidas Originals. Olly was also recently nominated by GulfBusiness as one of “T he top 30 under 30 businessmen inthe Middle East” for his involvement in some of the largestevents in the region’s entertainment industry.T he much anticipated arrival on the scene of this epicpartnership is set to cause ripples in every direction with itsunique combination of Greg’s classic house sound matchedwith a darker bass aesthetic and vocals from Olly will proveirresistible to the masses, and equally as fresh to the musicconnoisseur.