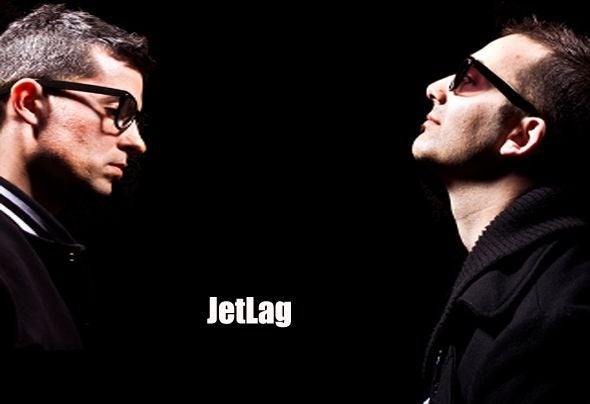 JETLAG Ivan and Alex Jet Lag, a fresh and warm to divert time and changes in  sleep ... A very groovy sound and staging and sometimes funk and disco  indie, and are at the scene. They are now the owners of Logical  Records in Madrid, a platform which carries more than 20 eps, about 60  tracks in the main online store, Beatport, already having their own  space and top ten list with the best selling items. From the depths of  Madrid appear to open a new era within the seal in which the proposal  happens to be more deep and more fun to just dance party ... A stage  that will produce discs JET LAG house and indie levels more energetic  vocals and much more interesting collaborations, and a wild desire to  be heard. At club level, JET LAG offers more quality, a setup  consisting of two tracktor scratch, two control x1, and two computers,  which led to a back to back most explosive, dynamic, full of changes  and effects that the track will not stops moving from start to finish.  Ivan and Alex have been active in several clubs of the nightlife, and  Café la Palma, Barracudas clubbing sessions, Coppola Club, Piano Bar,  Lucky Bar, Redrum, among others, in addition to outputs as Duplex  Style festival, both the issue of Ponferrada as the edition of  Barcelona during Sonar week with two consecutive Friday and Saturday  performances, it also stressed its showcase presentation Mimetic  London club, along with the guys Akusah label. In cab company had the  reputation as DJs Stimming, Solomun, HOSH, Msoga, Mario Maroto,  Satour, Manuel Arce, Fernando Sanz and others ... The great support  JET LAG will be reflected in his headquarters, which is  logicalrecords.net, page which houses the bulk of your project. An  online monthly releases, a catalog of more than fifteen employees  working artists from around the world, a podcast on iTunes line, which  keeps us abreast of their sound in the cabin, a YouTube channel, where  we often see videos promotion and their parties, and a large business  through social networks like facebook, twitter or resident advisor,  where agitation is constant.