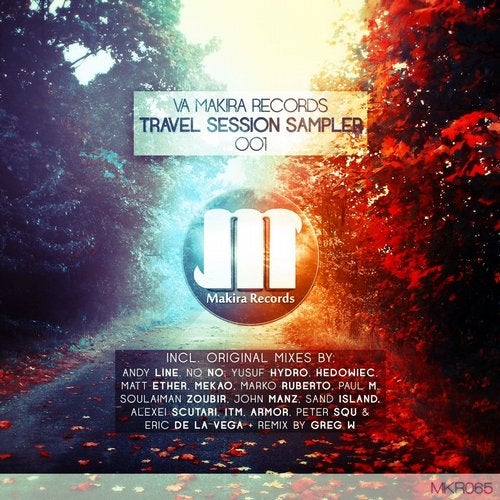 VA Makira Records Travel Session Sampler 001 [MKR065]
As with each season that turns, we at Makira start to collect some amazing new tracks from some of the best we know, as well as tracks from new and upcoming artists, which all culminates to yet another installment of our seasonally themed Makira Records Travel Session Sampler series. This new collection, being our 17th installment to this series, packs a phenomenal amount of power, beauty, ambience and all-around heartfelt talent that we at MKR couldn't be more pleased to be presenting to you all. For Makira veterans/new talented producers and name stays we have artists such as Eric De La Vega, Mekao, Yusuf Hydro, Andy Line, No-No, Hedowiec, Marko Ruberto, Soulaiman Zoubir, Paul M., Sand Island, Armor, John Manz, Matt Ether, Peter Squ, Alexei Scutari, Infinity State, Greg W and ITM.
At the very beginning , dedicate intro of Eric De La Vega in the track "Wind Whisper " . This track has magical sounds that can move a recipient "another world " . Do not Sleep on , because as soon as you wake up Mekao . Number two "Horizons" . Numerous melody lines enter the soundscape, as the groove continues to crescendo toward the main break. In the song's climax, the beat drops out, and we're met by a breathtaking piano solo. Yusuf Hydro is a young talent that shows you the song "Twelve " is the hope of the great productions in the future - his ear hears sound, which wants to convey to its customers . Who is next ? Andy Line from Central Europe , directly from the Polish music scene shows the track of you with a beautiful name " Miami Beach" . The title alone can take us to Miami , and also well chosen , progressive sounds in the song helps us to relax. Guitar , seagulls - a real beach in Miami. No-No and track "Beyond the Sky", production is an awesome one, built through deeper textures with spiced up melodies and warm synths working this to the beauty it is. It's full of sparkling life and we fell for it at the first listen. Emil Kacprzak " Hedowiec " on the spot 6 with the track " Here I Come " . At times dark progressive, with developing an interesting melody. Lucky seven for Marko Ruberto in the original comes from the Italian producer who now joins us on Makira with an excellent retro filled production. As always his true talent and 80's feel shines through, just as we wanted. It's as good as ever from him and we are thrilled to showcase him through our roster. "Smiling Faces" from Soulaiman Zoubir is number 8. If your search are melodic harmonies, driving bass lines and a "feel good mood", well then we can tell you your search is over as this magnificent rebuild takes a well deserved spot on this release. It is true melodic progressive written all over it. Deejay and Producer from Bogota – Paul M "Marshmallows" we can not say anything less than That we are thrilled to release a production of this caliber as this is just the melodic styles That in so often seek for . Piano rolls , driving percussion and an overall crisp sound design makes this a hidden treasure That we hope will get attention from a lot of you . Sand Islands is next Europe producer, track "Airplanes" with a "feel good" summer-ish progressive production he takes his spot as this week artist on original duty, and we are truly pleased with this one, as it definitely is a laid back track, just right for the season here in Europe. In our release once again Armor with "A World Without Humans". The title is sad, but the song itself is the opposite of the title. It sounds that give us a moment to reflect and gentle impact in the piano give track good harmony.
Do you believe in love? The charity believes sure John Manz , who "confessed feeling" in their production of " Te Quiero " . Free melody , quiet song will satisfy depths of musical guests who want to relax after a busy day . Track number 13 is our good friend, who once again seems to work in Makira Records - Matt Ether . This time he prepared for us an interesting offer progressive tracks that are at a high level of music. The song takes on BPM and becomes a really interesting proposition for people who like themselves "swim" . Peter Squ - musical adventure began in earnest after the release of the track in Adriatica Records , and now it's time for a proposal created especially for you in Makira Records in the track "Perpetual Motion". Interesting tracks, referring to a light progressive trance.
The Balkans is a beautiful region , hence comes our friend Alexei Scutari - Moldova Today we have for you the track "Eagle" . We all know his great style and the emotions that transmits in their productions. A good brand - it was him . "The Speed of Dark" in Greg W remix for Infinity State very nice drive and energy that we do feel will strike very well – great work, such progressive love. Another of our "resident " which works perfectly. Our Japanese colleague ITM . It is said that " the best, is the end " . So it is in this case - confirm . The incredible production , " Lilac " is a summary of the skills of the manufacturer. True , the Japanese sounds - he feels these sounds , the energy , the magic of music.
Text By : Hubert Napierski
Mastering By : Oakfield Mastering