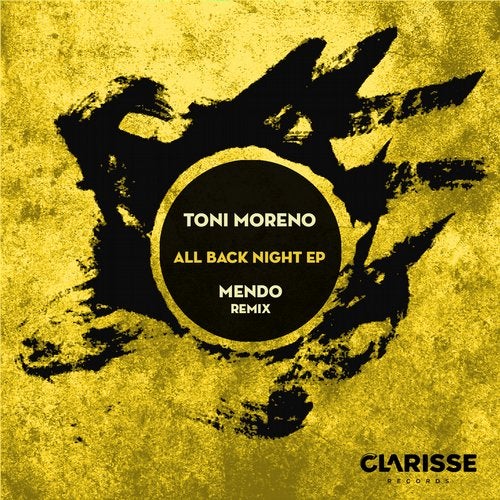 Wasting no time in getting their next half century of releases under way after celebrating their 50th with Dario d'Attis and Yvan Genkins, Clarisse turn to an Ibiza authority for an autumn turbo boost blowing away any post-summer blues. Toni Moreno is the younger of Ibiza Global Radios Moreno brothers, supporters of and spinners alongside Carl Cox, Luciano, Steve Lawler and Darius Syrossian, and someone who has conquered the island monuments of Pacha and Ushuaia. From ears to feet its obvious that Moreno knows what it takes to get the attention of the worlds clubbing community.

Right from the first beat you can tell All Back Night is a true school student, and so it proves with its bassline weaves, classic stabs that slam down, a rallying pro-house music slogan fit for a designer tee, a layer of jelly-like acid, and vibe telling you that theres never a bad time to jack. Showing that as much things change, the more they stay the same, Moreno draws a cutting edge from houses history books.

Clarisses Mendo muscles his way in on the action, switches on his miners lamp, and typical of his tribal attributes, grinds the original down and deeper. Scooping up bass from the belly of the beast and taking All Black Night to an outback of a dancefloor you wont find on any map - clanks of percussion buffer you along its blind route beyond the booth - he turns the original into a tightly packed house tunneller.

Morenos second in command Jade is again direct in its targeting of dance purists from beat one, skippered by a tricky worm of acid whose 303 diet swells throughout the track. For all its squishiness, its one tough nut delivered from Detroit: hi-hats snap hungrily, the sweat count is off the charts, and the Motor City hallmarks are Moreno enjoying his commute back to the future.