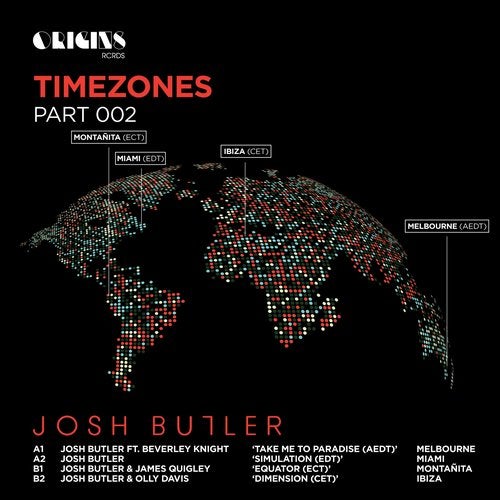 A brand-new series launched in late November, Josh Butler's 'Timezones' series has quickly become one of the most highly awaited releases of 2019, with support from a who's who of leading names from right across the electronic spectrum across the first package, from Groove Armada, Anja Schneider and Hot Since 82 through to Michael Bibi, Sante, Riva Starr and Camelphat. Having focused the first EP around strictly solo productions, 'Timezones Part 002' sees Butler reveal his first set of collaborations alongside a further solo cut as he welcomes legendary vocalist Beverley Knight, plus longtime friends James Quigley and Olly Davis as he now delivers four fresh productions influenced and produced via Melbourne (Australia), Miami (USA), Quito (Ecuador) and Ibiza (Spain) respectively.

Butler's collaboration with Beverley Knight opens the package in emphatic fashion as the two artists reveal 'Take Me To Paradise', a classy house cut started in Melbourne and debuted at Paradise at DC-10 in Ibiza this summer, combining Knight's effortlessly commanding vocals with slick drum arrangements, dubby pads and energy building breaks to reveal a cut that looks set to become a staple for many in the months ahead. Next up, 'Simulation' welcomes the sole solo production on the package as tripped out vocal snippets meet crisp hats, resounding kicks and a trademark low-slung groove, before transitioning into the deep and melodic 'Equator' made alongside old Leeds housemate James Quigley - an emotive yet driving production first made back in 2016 before being finally unveiled a year later in Quito (Ecuador) and revisited once again when both artists were in the city. The package is then wrapped up by a collaboration alongside Rawsum boss Olly Davis as the duo channel rich chords, shimmering hi-hats and acid-tinged bass licks amongst the stripped back 'Dimension' to shape up the EP and the second instalment of the series in style.