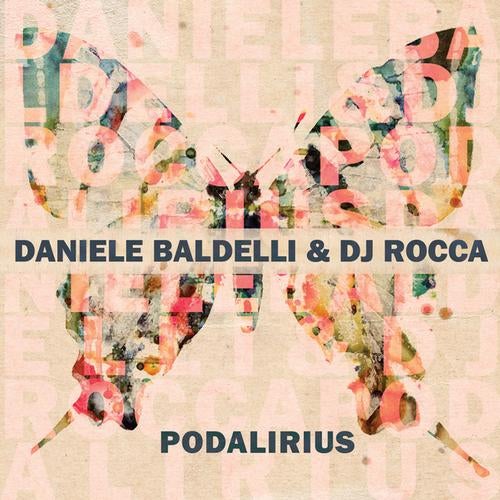 Think back to the late 70's/early 80's, Northern Italy, when the sound palette was a churning, hypnotic melting pot. The evolution of Cosmic had began from a combination of Afro rhythms, Italo Disco sensibilities, Jazz, science fiction and a surge of synthesisers, emanating from clubs such as Typhoon, Chicago, Bisbi, Mecca, and of course Cosmic.

Here at Nang we are proud to have one of the sound's founding fathers, Daniele Baldelli, back with us. Ably aided by DJ Rocca (aka Ajello, Crimea X and Supersonic Lovers) in his Mars Life Studio, the pair have brewed up a startlingly accomplished album of cosmic slo-mo machine funk.

We dive straight in with 'Complotto Geometrico,' a galactic dancefloor experience that spews out elastic synth lines and otherworldly rhythms in glorious fashion. Next up the title track 'Podalirius' follows suit with its equally as poignant synthesis, interspersed with a beautiful flute lines, laser pulses and rolling percussion.

'Roba Che Scotta' takes us away with a beam of arpeggios and Sci-fi themes, within a more classical disco template. 'Rate The Stars (ft. Tahamene)' starts with a thumping boom-bap, before leading into an spacey arp-driven vocal track, with Tahamene's brilliant top line adding to the melancholia.

'Teorema' brings the tempo up a notch for a lesson in spaced-out dancefloor mechanics. The bass is solid and string, supporting the surrounding synth melodies and laser beams to carry it in any peak time scenario. 'Haughty Rhino' is equally as strong, but the vibe goes a little deeper, it's a little more visceral. The epic synth lines stand their ground for the introverted headphone listeners just as much as the extroverted twilight adventurers.

As we draw to a close, 'Flugdisco' helps things down a little easier with its melodious contemplative moods, the washes of star-lit pads and progressive arrangement. To finish things off in fine style, the 2010 Nang single 'Space Scribal' makes an appearance for old times sake. For those that were there, this is classic Baldelli and Rocca, for all you new fans, revel in the sonic supernova!