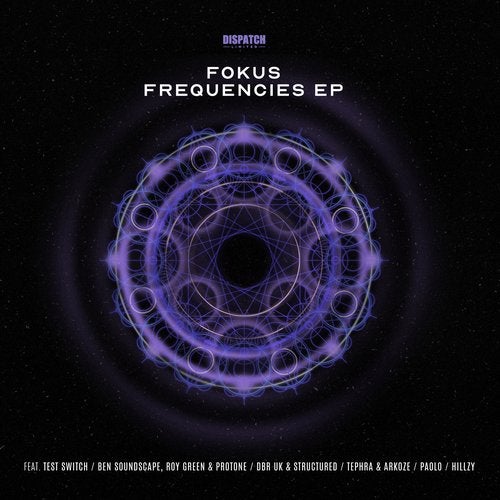 'It's been nine years since my first release on Dispatch Recordings (Structure made with Skeptical). In that time I've featured on so many releases with some great producers (DLR, Homemade Weapons, Black Barrel, Dub Head, Tephra & Arkoze, Bredren). I have built a back catalogue of music that I'm incredibly proud of. It's with great pleasure that I can now present my own project - the Frequencies EP.


This is the culmination of over two years of work - what started as a collaboration with Test Switch has grown to become a varied collection of tracks featuring some of my close friends and allies within the scene. The title track - Frequencies - is a particularly poignant moment as I have known Ben for nearly 15 years. He was the first promoter to offer me a proper residency, and I continue to play at his night - the Bristol-based 'Intrigue' - to this day.


This EP has allowed me to showcase my versatility as an artist. I've balanced the more aggressive lyrical styles (something for the heads that like to hear an MC spit!) with the catchy dance floor rollers and some laid back, conscious grooves. Whatever you are into, I'd like to think you will find it here.


'Frequencies' is also a pivotal moment in my career as - for the first time - I am the lead artist as opposed to a 'feature'. This scene can sometimes undervalue the role of the MC, and I think it's critical that we are recognised as artists within our own rights.


However, I am completely aware that without the hard work of the producers involved, there would be no music. I cannot make tracks on my own; I do not claim to be a producer. It's a team effort, and I only work with people that I get along with, where there is mutual respect. I am super grateful to all of the guys for the beats they've made.


Enjoy the tracks. The next batch of ammo is already in the chamber, got to keep things moving forward!' Fokus