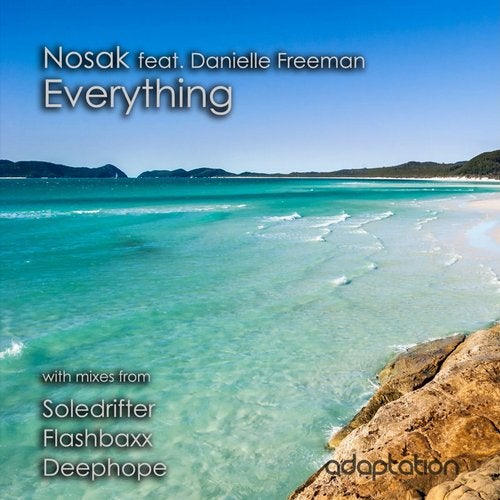 The 51st instalment on Adaptation Music comes from Greek producer Nosak alongside vocalist Danielle Freeman with 'Everything', backed up by some great remixes including a particularly special remix from Soledrifter. DJ support from Golf Clap, Glenn Underground, Groove Assassin, N'Dinga Gaba, Vinny Da Vinci, Dave Mayer and more.
Hailing from Thessaloniki, Nosak has been producing deep atmospheric house music for a number of years on underground labels such as DeepWit, Disclosure Project Recordings and Elektrik Dreams. Alongside production, Nosak is a busy DJ and hosts a regular radio show on www.joinradio.gr.
First on remix duty is man of the moment Soledrifter, who delivers a superb slice of deep house perfect for the floor. Soledrifter's prolofic and consistent productions have seen him grace the likes of Salted Music, Amenti Music, Large Music, Duffnote and more.
German producer and 'chill house' extraordinaire Flashbaxx returns to Adaptation Music with a sublime remix that would be ideal for any beach or pool party. Owner of Baxxbeat Music, Flashbaxx has also released music on various labels and featured on a number of compilations including the Cosmic Elements release 'Distant Horizons'.

Rounding off the package is a deep, dreamy and atmospheric remix from the talented David Garcia a.k.a. Deephope, owner of Deep Clicks Music. In the last 5 years, his prolific production rate has seen him appear on numerous labels including the likes of i!Records and Savoire Faire Music.