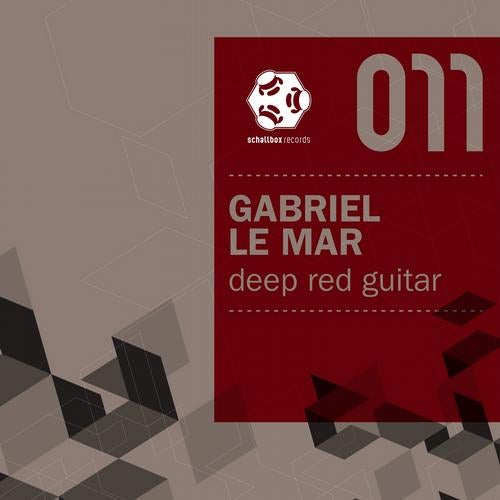 Schallbox inaugurates the Open-Air season and by doing so unmistakably calls out for a dance! The high spirits of the party held for its tenth release is still in everboby's mind - and the blaze is still burning! Yet team Schallbox around Steve Cole follows up by presenting Space Night astronaut, Saafi Brother and sound design artist Gabriel Le Mar with the spherically driving and playfully dreamy track "Deep Red Guitar". The unmistakable style of Gabriel enriches the spectrum of the Basel based recording label, yet fits perfectly its flow of exceptional club music for body and mind. The original version invites you to an expedition through an acoustic landscape composed of a smooth piano and a levitating guitar, through which a stream of ever changing and interacting rhythm and bass elemtents paves its way. Surprisingly the A-side is complemented by a remix by Julius Lagerfeld. After a long absence he ties in at the same spot he left five years ago with his remix of Chris Zippel on Elektrolux. Atmospherically true to the original, he subordinates everything to a swinging shuffle groove, that gets intersected by an atmospherically appealing break just to bring all drifted spirits back down to the dance floor after this. The second side is openend by beat pharmacist Brendon Moeller with a hypnotically pounding interpretation, whose continuing chordplay is being carried by a deep and warm bassline. The finale is being served by Smalltown Collective: a swim in a pool of artificial waves, in a body of flowing water with the irresistible pull of an embankment turbine. Percussive and tonal elements are being joined to form a whole, which invites to dance and at the same time to dive in and engross. As usual with Schallbox, there is a consolation for all those who have to do without the high grade black gold and will sidestep to the digital alternative - and the consolation this time turns out to be especially rewarding: The Digital Bonus Remix has been done by label boss Steve Cole himself! With his usual great love for detail and an unmistakably sharpened Cole-Groove he completes the vinyl tracks perfectly and thereby rounds off the release of Schallbox011.