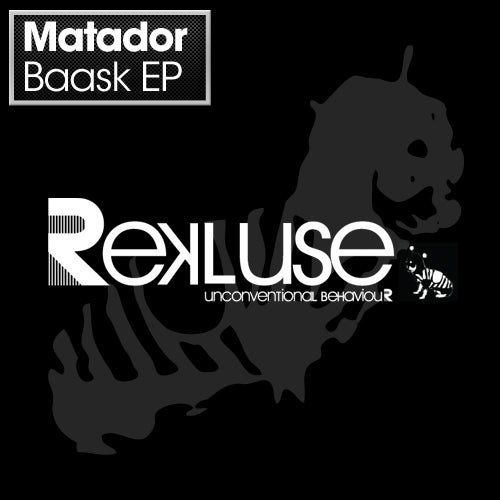 From Ireland, rising star Matador brings his trademark twisted and distorted sound-waves to Rekluse for the 19th release on the label, along with a remix from Mr Henry Von who continues his impressive start to 2011...

Fergie "I'm very happy to welcome Matador to the Rekluse Stable :-0 The remix of Baask is my pick, the Von seems to be getting his vonky on BIG TIME, I love."
Mr Henry Von "I've always loved Matador's unique and quirky style and sound, there's always quality in his productions."

Slam "Another quality release - playing thanx"
Kaiserdisco "Great job by Mr. Henry Von!!! Will play it for sure!"
D-Nox "I will play Mr Henry's remix. Like his music, so do i like this remix too"
Gary Beck "Quality from Matador again, great little hook in this track baask. Henry's remix is nice also."
Joseph Capriati "Henry Von is my fav!"
Hernan Cattaneo "Really good!"
Karotte "Mr Henry Von is the one for me."
Spektre "Loving the tech house vibe Henry :) Full support!"
Flavio Diaz "Innovative music! * * * * * thanks!"
Jon Gurd "Henry Von remix is lovely"
Anderson Noise "Very good!! Support!!"
Tom Hades "Loving Devils On Horseback as well as Henry's remix ! :)"
Nihad Tule "Not really my style, but good work!"
Christian Varela "Cool!"
Tim Richards "Heard this on Mr Henry Von's latest mix and have been looking forward to getting my hands on it ever since!"
Steve Mulder "Mr. Henry Von remix is the one for me! Brilliant!!!"
Alex & Filip "Henry's rmx is dopeeee!!! Love it. Another quality rls from the Rekluse camp! BOOM! :)"