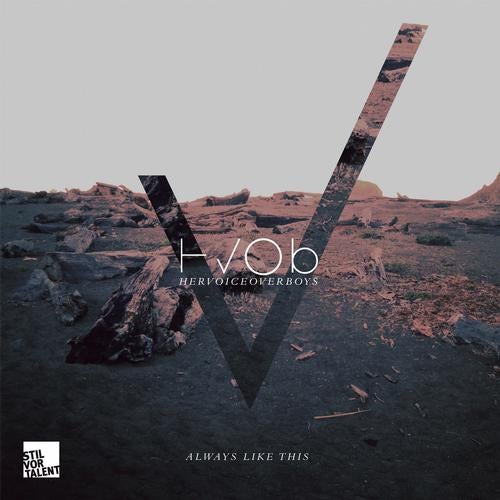 HVOB have only just released their impressive debut album, but the next EP is already on the way: "Always Like This" is almost a tribute to the Vienna-based electronic duo's current wave of success. Number 1 in the iTunes Dance Charts in Austria and number 3 in Germany, number 3 in the Beatport Deep House Charts and HVOB's eponymous debut album continues to win the band critical acclaim in a success story which began when the first snippets appeared on Soundcloud a year ago. HVOB's Berlin-based label Stil vor Talent, which is no stranger to success, has been delighted by one of its best selling albums to date. HVOB's third EP is scheduled for release on April 26 and the track selection seems to be more than mere coincidence. "Always Like This" is an accurate reflection of the young Vienna electro duo's life right now. Anna Müller and Paul Wallner are "super happy" with the way things are going, busy as they are with all the live appearances in cities like Berlin, Paris and Istanbul, long nights spent in the studio and the formation of new partnerships: alongside Four Artists, Primary Talent, one of the world's major booking agencies, will in future be looking after the interests of HVOB. "Always Like This" is the third single from the album "HVOB". HVOB's cover of the track by British indie rock band Bombay Bicycle Club mixes warm synth pads with soft beats, while Anna Müller's distinctive voice puts an entirely new spin on the melancholy of the original. Oliver Koletzki and Andhim have both made remixes of HVOB's interpretation of "Always Like This": Oliver Koletzki's version is powerful, emotive and melodic, while Andhim's shows incredible attention to detail and is intensely deep and original. HVOB, which stands for "Her Voice Over Boys", are Anna Müller and Paul Wallner, who formed the duo in spring 2012. Müller (composition, production, vocals) and Wallner (composition and final production) produce intelligent, sophisticated electronic music, which is both easy to listen or dance to. The Vienna duo, who favour live on-stage performances with the backing of a drummer, will be appearing at the Donaufestival in Krems, Lower Austria, the Lighthouse Festival on the Lanterna peninsula (Porec, Croatia), the Pratersauna in Vienna, the Übel & Gefährlich in Hamburg and the Ninkasi in Lyon. For more information and event dates visit: www.hvob-music.com.