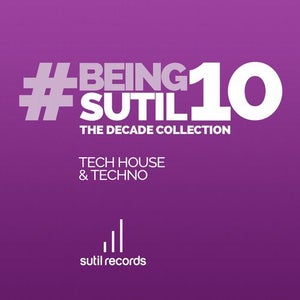 In November 2014, SUTIL RECORDS releases its commemorative collections to celebrate the label's 10th anniversary, #BEINGSUTIL10 (THE DECADE COLLECTIONS). It's 10 years since the label's first release, signed by the head honcho DAVID GAUSA and featuring the voice of his colleague STATIC REVENGER, and five years since their fifth anniversary album 'I AM SUTIL, WE ARE 5'.

To celebrate SUTIL's first decade, four compilations classified by musical genre have been released: HOUSE & DEEP HOUSE, TECH HOUSE & TECHNO, PROGRESSIVE HOUSE and PROGRESSIVE & ELECTRO HOUSE. Each collection consists of 25 tracks, and there's an exclusive GOLD BOX edition with 115 tracks, featuring the best 100 projects of the label, plus the best Acapellas and DJ Tools, all at incredible prices!

SUTIL RECORDS started life focusing on Progressive & Tribal House, and has now developed into firmly established Deep & Tech House label. It has showcased many styles along the way, and always been a trendsetter; never copying but creating its own sound reflecting the new styles and ideas in electronic music. The label has never lost its spirit, whether championing the underground or moving closer to quality mainstream music from Deep to Tech and from Electronic to more organic sounds. SUTIL has always maintained its credibility and respected image providing DJs with strong and solid music to play in their sets. This is a label made by a DJ with music destined for DJs who share his passion, the same passion for the music of us!

#BEINGSUTIL10 (THE DECADE COLLECTION), a must-have pearl in your record collections!