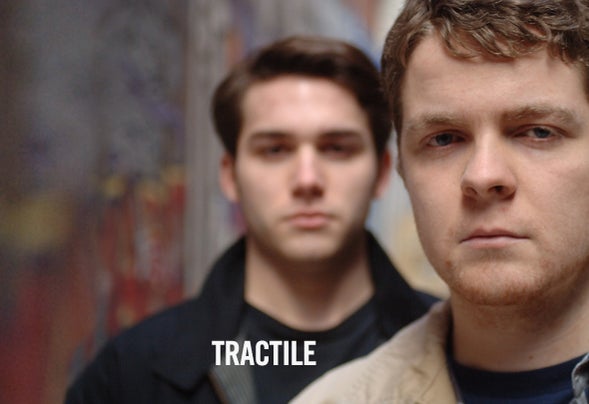 If someone was asked what it would sound like if all of the most frightening, most exciting and sexiest scenes in cinema history were spliced together and merged with a robotic dance score, "Tractile" would surely be the reply. Adam Young (b. 1983) and Joel Boychuk (b. 1985), with several years of miscellaneous music experience behind them and a few years as great friends and partners-in- crime, decided to reinvent their sound and call themselves "Tractile." Having been obsessed with the concept of controlling the uncontrollable and seducing recorded sound of any kind, the name was a suiting merge between the words track and tactile. Boychuk and Young played their first public live show in 2003 and have continued to shake dance-floors ever since, always impressing and exciting their audience far beyond expectation. Influenced by a strange combination of filmmakers like Stanley Kubrick and George Lucas and the evolution of techno music and emergence of the "minimal sound" through artists like Richie Hawtin and Jeff Milligan, Tractile delivers barrages of demented but motivating tech grooves perfect for dance floors and at-home listeners alike... and with a swiftly- growing international fan base, it’s no wonder the name is on the tongue-tips of DJs and music fans everywhere.