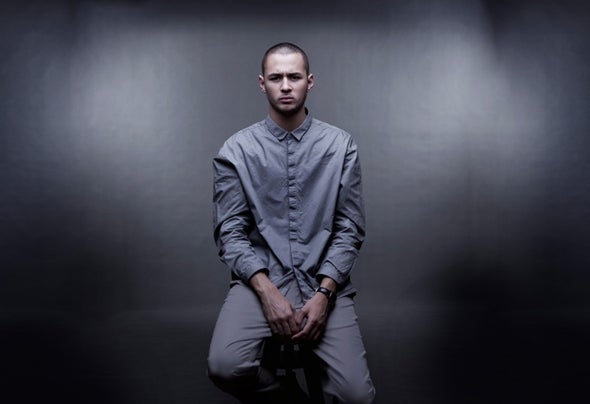 Discovered at Amsterdam Dance Event 2011, launched at Miami Winter Music Conference 2012, a debut single on the mighty mau5trap... Frederik’s story so far is a fantastical one of Hollywood-level proportions, and it’s soundtracked by his unique Technicolour bass-laced electronica. But who is this young Danish producer? How did he achieve such a startling career kick-start? And why should YOU be listening to him?To understand what makes a man sound so sick, first we must identify what makes him tick. A classically trained musician boasting cornet, French horn, piano and guitar skills, 20-something Frederik vibes to jazz while he’s cooking, loves all forms of bass music while he’s on the run and will happily boogie to a little pop, as long as it’s well produced and has an edge. He’s inspired by narratives, story-telling, typography, fashion, words, girls, and.... most importantly... All forms of great design.It figures: As a direct descendant from the founder of cutting edge, top-end sound equipment lab Bang & Olufsen, a desire to push audio to the upper echelons of perfection literally runs in his blood. Its creation, its delivery, its reproduction, its manipulation... Frederik’s fine balance of creative ability and technically inquisitive heritage provides a firm foundation for his role at the forefront of audio production. Couple this with his desire to conjure narratives and elevate large- scale productions to the realms of sonic story-telling – a direct inspiration from the long Danish winters and short-but- sensational summers – and his turbo travel to the top becomes clearer.Inspired by Linkin Park’s ‘Reanimation’ remix album and electronic indie rock bands like Veto, in his teens Frederik eschewed the classical noisemaking instruments of his childhood in favour a more contemporary armoury. A devout attendant at the churches of Noisia and Wolfgang Gartner, he began to develop a sound that is at once wholly uncompromising and immediately ingratiating. Created through a unique set-up that comprises myriad hardware synths, analogue processors and absolutely no MIDI whatsoever, he describes his sound “like it’s been crafted on heavy, rusty machines running on steam”. One cobweb-blowing blast on any of his productions and you’ll find it hard to argue otherwise. Sneering at the cosy securities of presets and ubiquitous plug-ins, Frederik is happiest in a hands- on environment. A tactile technician, he plays his machines like genuine instruments, endlessly tinkering and tweaking to hone the perfect auditory delivery. An ancestral habit combined with that urge to tell tales, it’s this depth of production and melodic clarity that attracted the attention of Deadmau5’s infamous Mau5trap and scored him the release of ‘Delirium’ in March 2012. A t rack t hat was unavoidable on bot h dancefloors and the music press throughout the summer.A constant battle between endless hours of studio science and a heaving international tour schedule ensued. Dancefloors from San Francisco to Scandinavia – and every European cit y in bet ween – have all been spellbound by his vibrant blend of electro, bass and titanic rhythm, each one of them test subjects to new releases he’s about unleash.‘Heavy Crownage’ marks the first of Frederik’s new material. Signed to Pilot Recordings – the exciting new platform from UKF founder Luke Hood – the title track alone is a frenetic fusion of euphoria and darkness. Soft emotion can be found dripping from the drops while the pay-offs are rude, raw and extremely rewarding.Behemoth beats for the biggest of rooms, but delivered with distinctive twist, playful character, and deep, developed production skills, Frederik’s sound sits comfortably across a spectrum of dancefloors. And with heavyweight peer props that span from SKiSM to Porter Robinson, it’s clear his Hollywood-level tale to the top has many more exciting chapters... Tune in for the next episode.