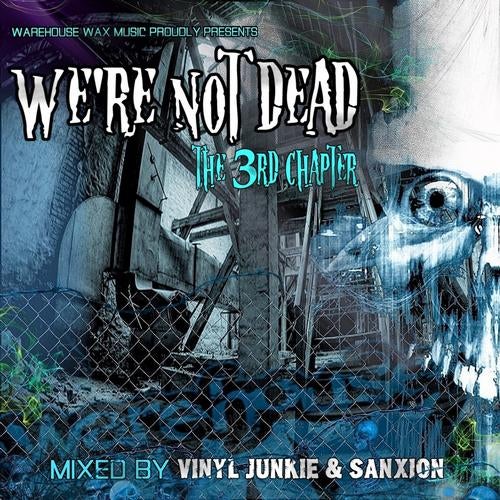 Were Not Dead. The 3rd Chapter.

Warehouse Wax has had a strong year so far. Releases from Odeed & Wish, Madcap, Pressa, Sanxion and of course the Massive single and video from Austin & Vinyl Junkie Ft. Rachel Wallace Cant Go Back. After all that, the label is finishing the year off with a bang. And definitely with the style and class you have come to expect from this scene leading entity.

Were Not Dead The 3rd Chapter boasts an impressive line up of artists that reads like a whos who of worldwide bass music in 2013. So what better way to see the year out? Here is just a sampling of those involved. Vinyl Junkie, Sanxion, Wizard, RadioKillaZ, Terry Hooligan, King Yoof, Backdraft, Flashback, 601, Odeed & Wish, Strange Rollers, Eddie Voyager, Schema, Madcap, 100me, Skanx, Billy 'Daniel' Bunter and loads more.

But As always, its the music that does the real talking here. Label boss Vinyl junkie has teamed up with Sanxion to co-curate this album and picked only the biggest noises. Floating somewhere around breaks, bass, 140 & future jungle. The genres maybe loose but the impact isnt. If you love hard hitting bass music with both an old skool and new skool vibe you will love this album.

2 Bad Mice Great selection of tracks from some of my fave artists. 8/10

Dreadzone Top Notch package, loving some of these, strong as fuck. 9/10

Billy Bunter I thought the 140 scene had gone quiet, Vinyl Junkie has had the whole thing on lockdown!! 10/10

N-Type Wages of Sin is Sick!!!

Orbital (Phil Hartnoll) Loving them Thanks 8/10

We're Not Dead (The 3rd Chapter)