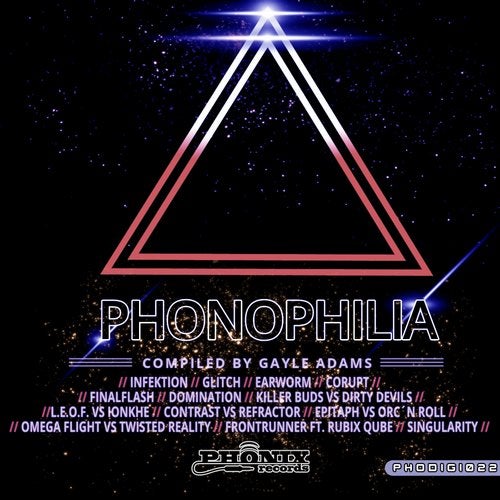 Phonophilia is defined as the love of sounds. For Phonix Records and our extended family, 8 years into our journey, and this love for sounds stays true. It is the north star that helps us stay the course. With that in mind, our very own Gayle Adams, partner and co-manager at Phonix Records, started her own journey to compile this release - a testament to the sounds we love. Over a year a later and Phonophilia was born - a journey built to stand the test of time.

The release starts off with Infektion's 'Rage' (Bruno Lopes/Portugal). Deep and deliberate, it is an ode to the classic twilight sound only the way Infektion knows how to - intense and engaging without compromise. Glitch (Dash Hawkins/ South Africa) steps in to dispel any 'Misconceptions'. More energy, more groove and a robot communicating through melodies, one simple message - something wicked, this way comes. We then go into the depths of the inner self. Through the practice of deep meditation, and fundamental vibrations, L.E.O.F and Ionkhe (Mario Funes and Ivan Lugo/Mexico) show listeners how each one of us can be a 'Nuclear Army' unto ourselves.

Reborn with a new sense of understanding - we encounter a message from the other side. FinalFlash (Robert Dalton/South Africa) share the otherworldly tail of 'Dhampyre'. A beautiful story with bone chilling atmospheres - a story as ancient as time itself. coRupt (Andre Rossouw/ South Africa) furthers this new found sense of focus through 'Strange Fiction'. He helps transition the release to the next level with an effortlessly woven story of epic proportions. The next chapter gets the adrenal glands working in overtime - Domination (Ricardo Barreto/Mexico) remixes Locked Locker's 'Alpha' (Marcelo Espindola/Brazil and Josue Guzman/Mexico). Carefully honed to a razor's edge - this is truly a diamond in the rough. Killer Buds (Marcelo Espindola and Tarcisio Mainardi/ Brazil) and Dirty Devils (Felipe Vidigal and Emilio Renault / Brazil) take this energy one step further with their outrageously over-powered tale of 'The Lumberjack'. Among all the chaos and mayhem, 'The Descent' into a melodic dimension starts with Earworm (Max Meshiv/Israel). The master does it again - with this slick psychedelic BOMB. Not to be outdone are Contrast and ReFractor's 'Hyper Drive' (Conor James Steed and Luan Boes/South Africa) - a deeper exploration further into the melodic dimension.

With the final leg of this release, Epitaph (Andres Romero and Jose Novelo/Mexico) featuring Orc'N'Roll (Alejandro Olvera/Mexico) take listeners into a burst of energy, guitar riffs and shadowy melodies. Singularity (Andre Muller/South Africa) further explores this realm with his epic remix of Iron Lotus's 'Lotus of Sorrow' (Daniel Honor/South Africa). A well-executed story that effortlessly balances both power and beauty. Not to be outdone, Phonix scientist Omega Flight (Derren Nuttall/UK) teams up with Twisted Reality (Ben Edge/UK) to present a deranged re-telling of Deliriant's 'Truth be Told' (Shane Renew/South Africa). A wormhole of an experience, their remix transforms this classic into something truly unique. Beware, the acid is indeed in the music. The final chapter of our journey is 'Anechoic Chamber' by FrontRunner (Marc Le Roux/South Africa) featuring Rubix Qube (Kieron Grieves/South Africa). It is a fitting end to our exploration of Phonophilia. Beware - the 'Anechoic Chamber' will completely absorb any residual waves and whatever is left of listeners with its measured manic chaos.

The Phonix team would like to thank everyone involved with this release for helping us realize our vision. Now, let's follow the north star like we have done so in the past, and will do for many cycles more... Take us to your speakers! It is time to explore Phonophilia!