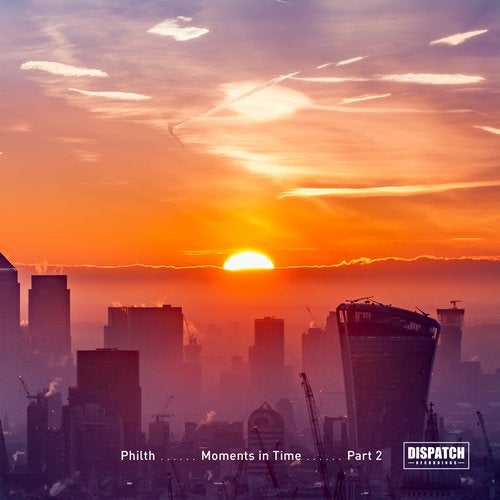 The second part of Philth's 'Moments in Time' LP is about to drop on Dispatch Recordings; after the success of its first segment, it's sure to make a similar impact and start 2020 at a formidable height for Philth. Comprising thirteen more brand new selections, it'll remind listeners of why his debut LP was such a sought-after release.
The album opens with 'Let You Fall', drawing for old-school breaks and emotive voice overtures. Meanwhile, Ella Sopp joins Philth once again for 'Just a Memory', with her luring vocals streaming through the mix. Daniela Rhodes is the next featuring artist alongside Philth for 'Solar Cycle', their drawn-out melodies and sublime vocals are underpinned by the tracks cinematic breakdowns and ambitious extended arrangement. 'The Teacher' pays homage to Philth's darker waters, with aggressive distorted sub bass and rolling techstep drums. Interlude 'The Storm' nods to Philth's vast musical background, whilst 'Rivers' allows you to become lulled by its searing strings. US duo Quadrant & Iris then join Philth for 'Emerald', a collaboration which mixes the light and darker elements which make all three producers so buy-on-sight. 'Damaged' is more ruminating, with moodier undertones and Becca Jane Grey makes another appearance with Philth for the rollers mix of 'Lost in a Moment'.
'Claws' shows a new production face from Philth, with his drum work acting as a centre piece. 'The Light' once again demonstrates his lighter side, like the ethereal tones of 'Just a Drop in the Ocean'. Finally Collette Warren steps up alongside Philth for the deeply reflective closing track 'Stuck in a Loop', the latest in a long line of collaborations between the pair.
Philth proves with another huge delivery that he's able to take you through a range of emotions, something which his music has always endeavoured to do. 'Moments in Time' also highlights Philth's enviable work ethic, something amplified once more by a production standard which is second to none.