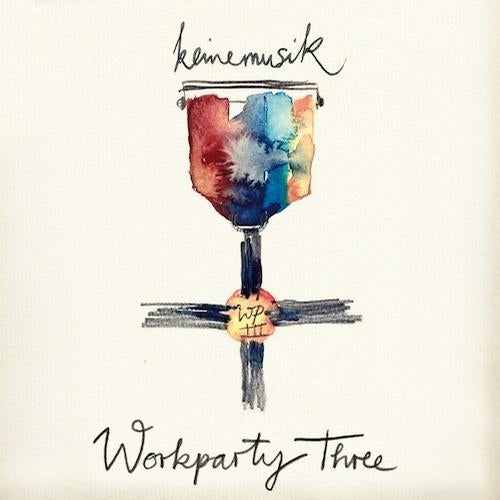 Its that time again Workparty 3 is here. &ME is opening that new cycle, thats projecting the state of play within the keinemusik-camp, with his very own version of autogenic training. Hearing those soothing vocals, one could mistake this even for some kind of floor- seance. But, of course, Everless wont let you sink into deep relaxation. Au contraire its percussive spleen, this, not unlinke a swarm of hungry hornets sounding, converging Acid-Drone and the relentlessly pumping groove of this cut will rather cause uncontrollable excitement within cleverly modulated peaktime-passages.Next in line, Adam Port is getting in touch with his percussive fetish again, pushing it into new dimensions with the appropriately named Drums on Parade. Port seems to find himself in the middle of a military parade, avoiding all too overstated rigor through revealing hints of Jazz and some serious shaker-temperament. As the centrepiece of the arrangement, youll find a drumsolo that at no point seems to loose sight with its goal of ultimate ecstasy. Thanks to Ports effective and dynamic buildup, it will of course be the partycrowd thats loosing it completely over this one.Rampas collaboration with Hollis P. Monroe opens the flipside with a rather mellow affair. They get Monroes Canadian buddy Overnite to croon his take on post-breakup-blues over a straightforward and deep arrangement thats seasoned by lashing claps and some mild synth-flavor. Overnite, the wise man that he is, wont wallow too whiny in melancholy, though. With capturing every glimpse of hope he can get, he comes up with some of the catchiest vocals you will meet this season accompanied by a soulified House-anthem. This tune is already predestined for the twilight hours of all the next open airs to come.