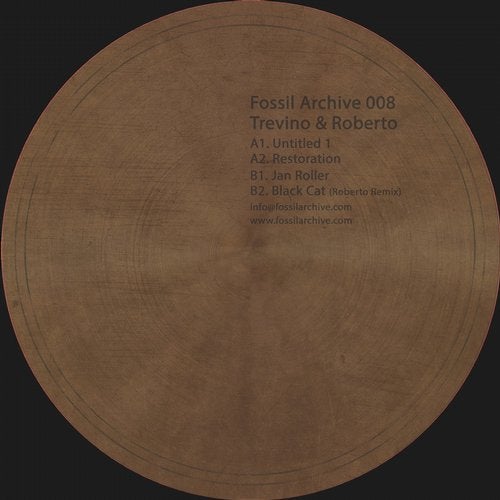 For the eighth release on Roberto's Fossil Archive imprint, a very special collaboration which was produced by Roberto and the late Trevino (aka Marcus Intalex) shortly before his tragic passing in 2017 is poised. The release features three original cuts, along with a previously unreleased remix Roberto put together of 'Black Cat' which featured on Trevino's album 'Front'.

The music speaks for itself. However, to honour Marcus, a short poem has been put together by one of his closest friend's.

"Music is the great tree that stands alone, every second twisting and turning, straining and stretching, as each leaf and branch fights for the closest spot to the sun.

The artists are the leaves and to the untrained eye, so plentiful and all look the same. While delicate and vulnerable to the changing of seasons, or taste.

But astonishingly one solitary leaf falling to the ground can make shockwaves that can be felt on the other side of the world and have a legacy that will always be remembered.

Marcus taught us all to create music that way."

All profits from this release will go to the Marcus Intalex Music Foundation.